“I Want to Go All the Way”- Nick Kyrgios Shocks the World No 1 Daniil Medvedev, Aims to Win the US Open 2022 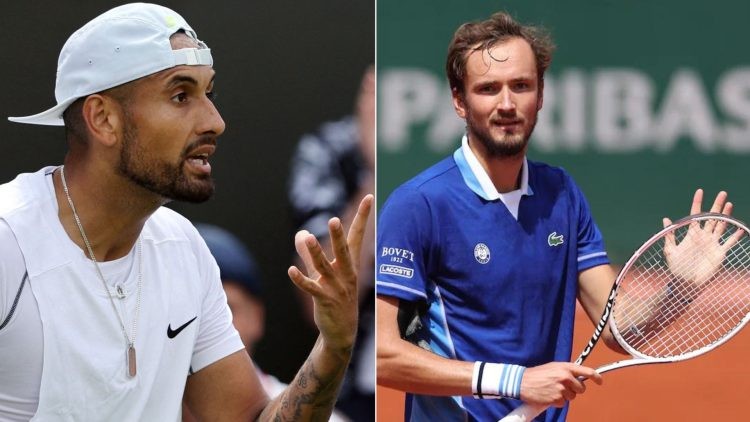 The self-proclaimed bad boy, Nick Kyrgios can be the one to defeat on a given day. Even though the Australian tennis star is mainly inconsistent with his performances, on his day he can possibly beat anyone on the tennis court.

The latest player to fall victim to Nick Kyrgios is World No.1 Daniil Medvedev in the US Open. Nick stunned Daniil, the defending champion of the US Open by winning a 7-6(11), 3-6, 6-3, 6-2 to progress to the quarterfinals of the US Open.

Nick was ecstatic with the match result, and in the press conference he stated,

“What a place to do it, Packed house in New York!”

“I want to go all the way, Hopefully, it is possible.”

Even though Daniil played a bit irresponsibly and conceded 19 unforced errors, the match was decided on the basis of the performance of Nick Kyrgios who played quite brilliantly.

Who will Nick Kyrgios face next?

Nick Kyrgios will face Karen Khachanov in the quarterfinals match, which could be a tricky fixture for Nick since Karen’s playstyle compliments that of Nick. In his match against Daniil, Nick was clearly the crowd favourite and enjoyed massive support from his fans.

He also was confident since he is 4-1 up on the H2H and has recently defeated Medvedev twice in a row. Nick has a good H2H ratio against all the big guns in tennis apart from Nadal and Federer. Even though Nick made a grave mistake in the third set, he did not allow this to unsettle him in the match.

Instead, he remained composed and on the contrary improved his overall game to defeat the World No.1. Nick who was the runner-up at Wimbledon and won the Citi Open, did not let Medvedev settle into his groove and find his rhythm.

Eventually, Medvedev succumbed to the pressure imposed on him by Nick and committed a lot of errors which shifted the tide of the match.

Neymar Jr Dating Life and Kids- Who Is Neymar’s Girlfriend?