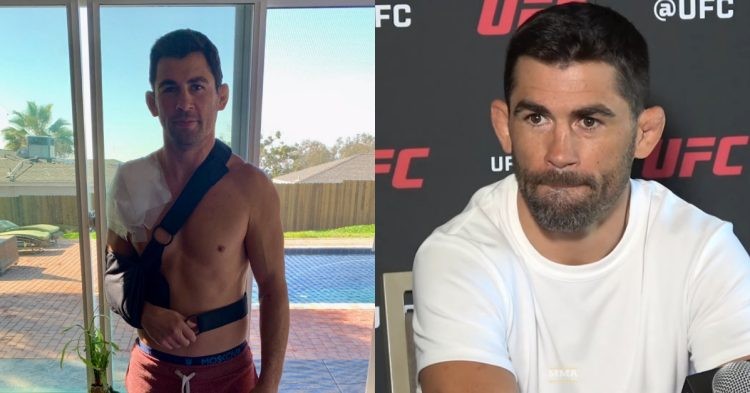 Dominick Cruz speaks on his injuries. (Images via Twitter)

Former UFC Bantamweight Champion Dominick Cruz is back in action this weekend. He will fight Marlon Vera in the main event of this Saturday’s UFC Fight Night event. Cruz defeated Casey Kenney and Pedro Munhoz in his last two fights. He is currently ranked 8th in the 135lbs division in the UFC.

Marlon Vera is ranked in the Top 5 of the division at the moment and defeating him will put Dom in contention for a title shot next. However, the road to this fight was not an easy one for him. Cruz’s UFC journey has been riddled with unfortunate injuries. Following his loss to Cody Garbrandt in 2016, he had to take almost 4 years off due to multiple injuries.

Chito Vera and Dominick Cruz is being targeted to headline a UFC Fight Night on August 13, Dana White confirmed on the Barstool Sports “My Mom’s Basement” podcast. First reported by @CCLegaspi.

White said that the card is expected to take place in San Diego. pic.twitter.com/ApHABDMe2J

Ahead of the fight against Chito Vera, he opened up on what he went through during his time away from the Octagon. Dominick revealed that he was under severe emotional distress. But he also offered advice to those who are going through something similar to him.

“Injuries while training is one of the toughest things you can ever deal with. I was so depressed at one point (that) I just didn’t really wanna live. I think the biggest thing I learned through the injury is when in doubt, focus out.”

“When you’re really doubting everything in your own life, focus on who you can make a difference for, it will pull you out of the depths of hell. You know, there has to be something bigger that’s driving you than just you.” (h/t via ESPN MMA)

A timeline of injuries Dominick Cruz sustained throughout his career

Dominick Cruz spent most of the prime years of his fighting career in rehab. Between October 1st, 2011 to May 9th 2020, he has only fought thrice inside the Octagon. He was inactive for almost 7 years out of the 9 years. So it just goes to show how unlucky Dominick has been in terms of his fitness so far.

The very first time Dominick was injured was during his WEC fight against Joseph Benavidez in 2010. Cruz broke his hand during the bout. But it was not a major injury and he recovered soon and defended his WEC belt only 3 months later. With the win over Scott Jorgensen in his next fight, Cruz also became the inaugural UFC bantamweight champ.

He defended the belt twice against Urijah Faber and Demetrious Johnson in 2011. But tragedy struck in 2012 as he suffered a torn ACL in his left leg during his preparation to fight Urijah Faber for the third time. Despite going under the knife to fix the ACL, it did not work and Cruz had to go through another surgery to repair his injury. It kept him out for nearly 3 years.

The Dominator came back against Takeya Mizugaki at UFC 178 and knocked him out in the first round itself. But he had to take off another 2 years as he tore his other ACL in his right leg. But he came back to regain his Bantamweight title in January of 2016. He beat TJ Dillashaw for the belt via split decision and defended the title against Urijah Faber at UFC 199.

Unfortunately for Cruz, he lost the belt to Cody Garbrandt at UFC 207 in a gruelling 5 round war. However, Cruz revealed after the fight that he was suffering from plantar fascia tendinitis. The injury occurs when the tissue at the bottom of the foot tears. After getting over that, Cruz suffered another broken hand in 2017. The list of injuries only increased in 2018 as he suffered from torn ligaments on both of his shoulders.

Fortunately for him, Dominick has fought 3 times after returning against Henry Cejudo at UFC 249. Although he failed to regain his title in the fight, Cruz has strung a few wins together ahead of his much-anticipated about against Marlon Vera.