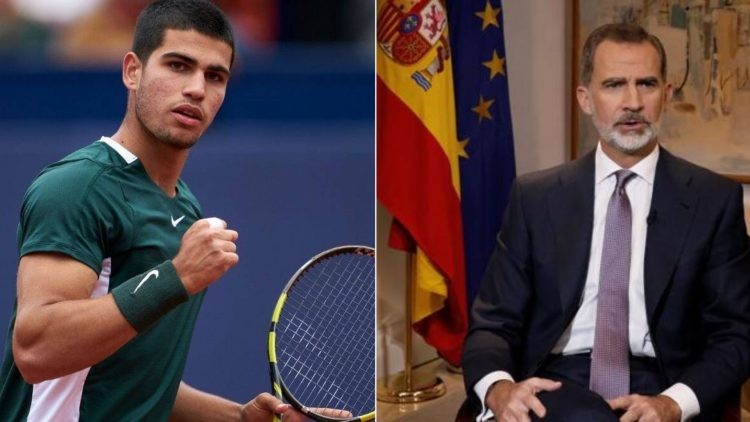 Carlos Alcaraz is currently the best young prospect in the tennis industry and he has proved it by winning his first grand slam title at the US Open and clinching the World No.1 rank on the ATP Rankings.

Carlos Alcaraz is currently considered to be the second-best Spanish tennis player after Rafael Nadal and it will not be long before he overtakes Rafa especially since Nadal is in the final years of his football career. Carlos still probably has not hit his ceiling and is way before his prime years.

Considering this, Alcaraz has already achieved glory and is still hungry to be the best. Carlos started to gain significant attention in the tennis fraternity after he clinched the Miami Open title. The Miami Open title was Carlos’s first major title win.

His win made him get appreciation from around the world including from Spanish royalty as well.

Why did the King of Spain call Carlos Alcaraz?

Apparently the King of Spain, King Felipe was one among those who called Carlos in order to congratulate him for his Miami Open win. The King recognised the fact that Carlos is one of the future stars and would make the name of his country proud and hence congratulations were in order.

Even though Carlos received a plethora of best wishes and congratulations across the world, however, the Kings wishes would surely have made him the happiest. Carlos in an interview stated,

“It’s pretty amazing to get the call from the Spanish king,”

“I was more nervous [for] that call than the match. It’s pretty amazing that the Spanish king congratulates you on the hard work that you put in every day and your win. It’s something that you never thought you were going to receive.”

Everyone’s eyes were on Carlos in course of the tournament because of the confidence he was radiating and also his world-class performances which impressed fans across the globe. Well, Alcaraz did not let the fans down and went on to win the ATP 1000 masters title.

Ever since then Carlos has been on a streak, he went on to win the titles in Barcelona and Madrid by beating Novak Djokovic and Rafael Nadal in a single.

Carlos recently won the US Open title which was his maiden grand slam title as well. Carlos currently sits at the famed World No. 1 spot above his fellow countryman and 22 times grand slam winner Rafael Nadal.