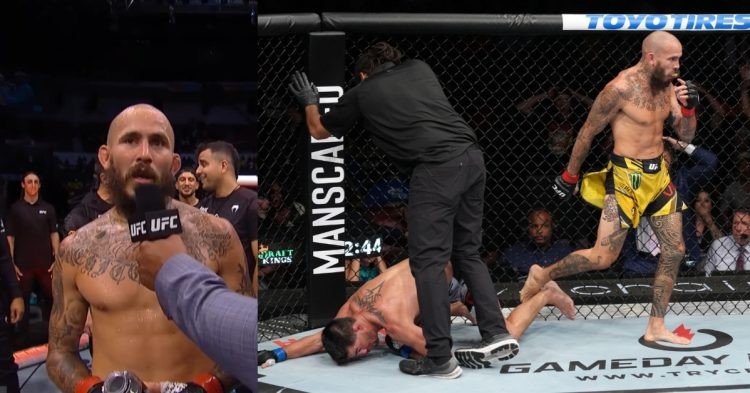 Marlon Vera just knocked Dominick Cruz out in the most spectacular way possible at UFC San Diego! The fight was an enthralling one from the opening seconds. After a 4-round back-and-forth, Vera landed a huge low kick which caught Dominick on the chin and put him out for good. Vera now becomes the only fighter to get a clean KO stoppage over Cruz.

The Dominator was not in a mood to hang about as he started the bout by blitzing forward. He found success with it too as Vera had difficulties getting going early on. Dom’s jab and his movement made Marlon wary of throwing big punches. But he soon found his groove as he dropped Dom in the later minutes of round 1.

Following that, Chito got two more knockdowns. Vera’s power seemed too much for Dom to deal with. There was certainly a sense of inevitability about the outcome. Although Dominick had success with some of his jabs and leg kicks, it seemed like one big strike from Vera could end the fight instantly.

That was exactly the case as a low kick from Marlon stopped Cruz at the 2:17 minute mark of the 4th round. Although Dominick lost to Henry Cejudo via TKO at UFC 249, it is often regarded as a very early stoppage. Cruz protested the stoppage immensely in 2020. But there was no complaint from him this time around.

The impact of Vera’s kick was very apparent during the post-fight ceremony. While Cruz was waiting for the official decision to be read out, the camera panned on him. It was clear that the kick had broken Cruz’s nose upon impact.

With the emphatic win over Dominick Cruz, Marlon Vera has extended his unbeaten win streak to 4 fights in a row. He was already ranked no. 5 in the bantamweight division. Hence, this win puts him in a prime position to fight the winner of Aljamain Sterling vs TJ Dillashaw for the belt. Although he called for the title shot after the win, Vera is in no hurry to get the fight.

“I came to the sport to be a world champion. I have the heart, I have the work ethic and now I have the people that will get me there. Whatever happens in those fights, I believe it’s all about performance. Whoever have the best finish, the flashiest one will get the title shot. At the end of the day, those are things we can not control.”

“So I’m not tripping. I will keep working, I will keep kicking a**. And Ecuador, I’m gonna be a f****ng world champion.”

Marlon has certainly emerged as the dark horse in the 135lbs division. He holds wins over the likes of Sean O’Malley, Frankie Edgar and now Dominick Cruz. He is extremely hard to control on the ground and his power is unmatched in the division. So it will be interesting to see if the UFC does end up giving him the title shot or not.

What did you think of Marlon Vera’s performance at UFC San Diego? Do you think it was the best win of his UFC career so far? If it is, then do you think it was good enough to earn him a title shot? Let us know in the comments down below.