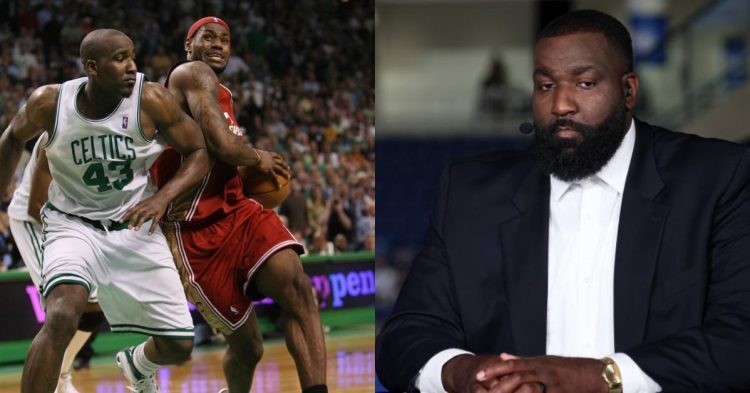 Kendrick Perkins recently showed up at JJ Redick’s podcast “The old man and the Three”, where he confesses, how scared he was of LeBron James and wished he tore his ACL before Game 7 back in 2008.

Perkins is a former LeBron teammate and has a lot of respect for him. However, during his confession in the podcast, he said “I was scared a hell going into that game 7 against LeBron James and this was the only time that I actually prayed that something happened to him at practice, let us get breaking news like LeBron has torn his ACL or something.”

The reason why Perk was so afraid of James was when he dunked on Kevin Garnett. At that moment Perk realized “we ain’t getting past this motherf—er”.

KG is known as one of the best defensive forwards and LeBron just dunking on his head in the Playoffs will instill fear in anybody. Thus, KP being scared of LBJ is not a surprise.

LeBron in 2008 was at his peak athleticism and the dunk on KG was one of the most ferocious dunks we have ever seen in the NBA.

A fierce battle between LeBron James and Paul Pierce in Game 7, 2008

LeBron scored 22 in the 2nd half of which 13 came in the 4th quarter almost equalling Delonte West’s total score (15 points) in the game.

It was a back and forth fierce battle, where Doc Rivers-coached Celtics refused to let one man beat their superteam.

James and Paul Pierce came prepared for a fight, talking trash in each other ears, hitting shots after shots. Both posted an absurd stat line of 45 points and 6 assists, and Pierce had 41 points and 5 assists.

However, despite his heroic attempt, the Celtics’ Big 3 was too much for LeBron to handle himself, and ended up losing 97-92.

The Celtics would go on to win their 17th NBA title by defeating Kobe Bryant and the Lakers in 6 games in the NBA Finals.