by Mukhar Ghosh
in UFC
0 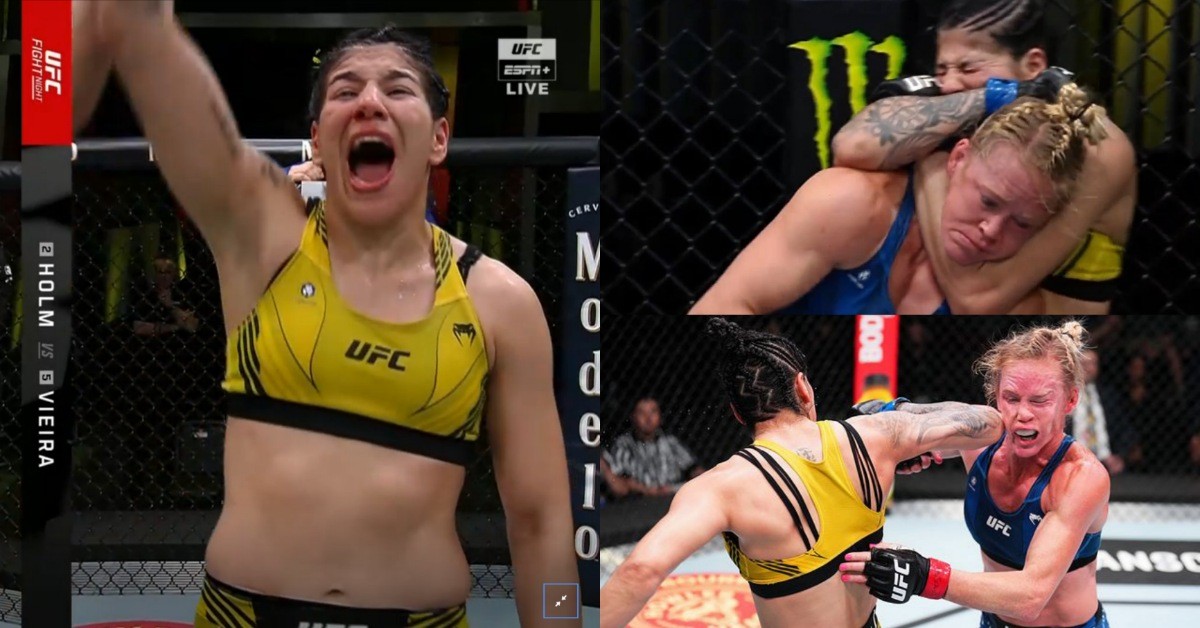 Holly Holm vs Ketlen Vieira just went down at UFC Vegas 55. Coming into the fight, both of them were ranked pretty high in the division. The winner of this fight had a big claim of becoming the no.1 contender to challenge the champion of the division. While Holly was the veteran with years of experience trying to get one more title shot, Vieira was on the quest to earn her first opportunity to fight for the belt.

The bout was a classic match-up between a striker vs a grappler. Holm was the better striker on paper, while Ketlen had much better grappling. While a clinch heavy, 5 round stand-up battle was Holm’s best chance to win the fight, Vieira had to secure a takedown to have any opportunity to succeed in the contest.

The Preacher’s Daughter won both of her last two fights against Raquel Pennington and Irene Aldana. Ketlen ‘Fenomeno’ Vieira was on a two-fight win streak heading into the fight. But Holly was 40 years old, going up against an opponent who was 10 years younger than her. As a result, some fans and pundits doubted whether Holly can get the job done or not. So how did the fight go down? Let’s find out.

Round 1: Ketlen Vieira started off with some good leg kicks. She tried to take away Holly’s movements by the kick. But she did not wait for very long as Ketlen shot for a takedown immediately afterwards. Holly managed to stuff the initial one, but Vieira used her superior Judo skills to land a flash takedown. However, Holly scrambled out of it right away and they spent the rest of the round clinching on the fence. Holm ended the round by sweeping Ketlen’s leg and dumping her on her head. So far so good for the veteran.

Round 2: The Brazilian came out strong in the second round. In the opening minutes itself, she landed a few significant shots that made Holly take a step back. When Holly tried to rush  Vieira, Ketlen secured a beautiful takedown with a picture-perfect hip toss. But the biggest moment of the fight came in the second minute of the round when Ketlen almost got a standing guillotine choke which turned Holly’s face red. But just when it seemed Holly was ready to tap, Vieira let the grip go and Holly slipped up to survive the round. It seemed like the contest was 1-1 heading into the third round.

How did Holly escape this 🤯 #UFCVegas55 pic.twitter.com/HLUrWcr83D

Round 3: Similar to earlier rounds, they both exchanged leg kicks to start off the round. Holly once again proceeded to rush Ketlen. But she showed great head movement and dodged all of Holly’s lunging punches. But whenever Vieira built up some momentum, Holly was able to tie her up in a clinch. She landed a lot of potshots in the clinch on the 30-year-old. But Ketlen eventually broke off the clinch and landed a bunch of clean shots that seemingly hurt Holly. Difficult round to judge.

Round 4: Ahead of the fourth round, Ketlen Vieira’s coach urged her to use her punches more. She did exactly that. Instead of looking for an early takedown, Ketlen waited for Holly to rush in and landed powerful counter shots. But Holly found an opening in the third minute as a vicious kick knocked Ketlen down briefly. While Holm was the more active fighter, Vieira did more damage. Another very difficult round for the judges to score.

5th and final round here we come! How do you have it scored? 📝 #UFCVegas55 pic.twitter.com/k1nHjCHfuS

Round 5: Ketlen’s coach told her that she was down on the cards 1-3. It seemed to spark something inside Vieira which made her land shots with vengeance. She even landed a head kick and spinning elbow early on. But Holly’s chin held up as she kept circling around the cage waiting for Ketlen to make a move. Holm landed a few decent front kicks and tied Vieira up in a clinch for the majority of the last 2 minutes of the final round. A very good round for Holly Holm to end the fight.

But the judges seemed to prefer the damage that Ketlen Vieira caused as she picked up the victory via split decision. Two judges scored it 48-47 for Vieira, while one judge had the same score the other way around for Holly.

Holly Holm’s reaction to her loss

The fight was definitely a very close one and Holly Holm definitely sounded heartbroken after the contest. She did not agree with the judges’ decision. Commenting on the fight and her future, she said,

“I thought I won the fight. I don’t feel like it was a question.” – @HollyHolm#UFCVegas55 pic.twitter.com/uZo6WUjeAy

It will be interesting to see where Holly Holm goes from here. But Ketlen Vieira called for the title fight next and declared herself as the champion.