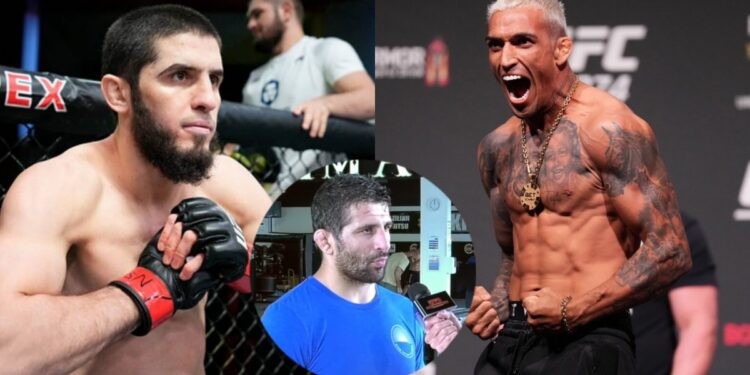 Beneil Dariush thinks Islam Makhachev is the favourite to beat Charles Oliveira! He recently gave an interview to Helen Yee and revealed that Makhachev will definitely have the edge over Oliveira. However, Dariush also stated that Oliveira will be the toughest match-up of his life to date.

Until very recently, Beneil Dariush was the favourite to face the Khabib Nurmagomedov protege. But now, he does not seem to be very confident about the fight taking place. Beneil added that the fans and pundits want Islam Makhachev to fight the no. 1 contender Charles Oliveira for the vacant title. Hence, the chance of him fighting Islam has decreased significantly in the last few days. But the Iranian-born also stated that if the bout does take place, it will be in Abu Dhabi. Something that Islam Makhachev himself confirmed a while ago.

The 33-year-old then asked how he sees the fight between Islam and Charles playing out. Despite leaning towards Makhachev, Beneil is doubtful of Islam’s ability to handle any kind of offensive pressure. Makhachev has been a wrecking ball in the UFC so far and has beaten his opponents without facing any kind of pushback from them. Whereas Charles Oliveria is an all-action fighter who uses offence as his best form of defence. Pointing that out, Beneil Dariush said,

“It’s hard to say, we’ve never really seen Islam under pressure with striking. And Charles has the ability to do that. He’s so offensive, he’s 100% offence… The question is going to be can (Islam) take Charles down? Can he be able to apply that pressure and break (Charles)?”

“If Charles is as aggressive as I think he is going to be, It’s gonna be difficult for Islam to close the distance which makes things trickier… It thinks it’s a really exciting fight, I would lean towards Islam, but not by much, by a hair.”

What is next for Beneil Dariush?

If he does not fight Islam Makhachev, there are a few options left for Beneil Dariush. He currently holds the no. 6th rank in the UFC lightweight division. A win over Islam Makhachev would possibly have secured a title shot for him. But if he does not get the fight, what is next for Beneil Dariush? Fighters such as Dustin Poirier, Justin Gaethje and Michael Chandler are in the Top 5 of the division.

Interestingly, Conor McGregor called Dariush out in a deleted yesterday. A fight against Conor will be the most lucrative option for Beneil financially. A victory against McGregor will not only be good for his pockets, but it will also give him a lot of mainstream exposure which may force the UFC to consider Beneil as a viable contender for the title.