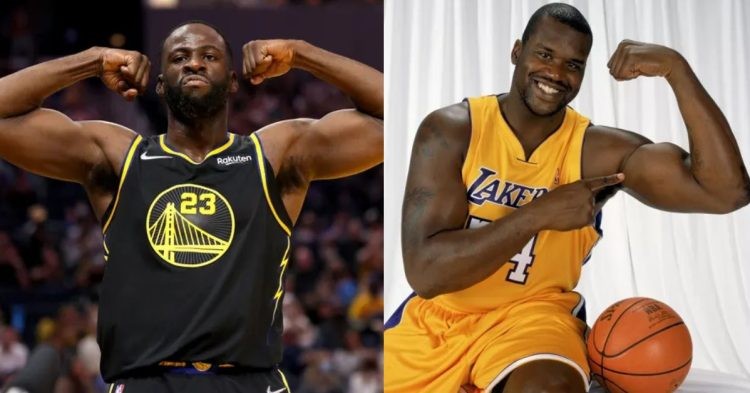 Basketball is a physical game despite what fans of other sports claim. Over the years, many players have established themselves as the strongest players. Right now, Golden State Warriors star Draymond Green is one of the strongest players we have in the league. Recently, Draymond has managed to get in trouble after assaulting his teammate Jordan Poole during the team practice.

His punch reminds us of how big his fighter mentality is. Moreover, it brings us back to the time when he almost picked a fight with NBA legend Shaquille O’Neal. As unbelievable as it sounds, it did happen. Draymond spoke about O’Neal on the “All The Smoke” podcast.

DG said, “Shaq has always been one of my favorite players. But I’ve always watched the game as a student of the game. Me and Steph Curry would have f*****g destroyed Shaq in the pick and roll. In our era of basketball, we would have destroyed them,” Green said. “But in Shaq and Kobe’s era, where they’re f*****g dumping the ball down to Shaq, we probably would have got crushed. That’s just the reality.”

If we’re being honest, DG may be right about the fact that Shaq would have destroyed Stephen Curry and him if they faced him in the older eras. The reason for that would be because it was a lot more physical back then. Moreover, O’Neal had made a name for demolishing his opponents on the court by crushing them.

The interesting point is that Shaq replied to Dray as well. On the Big Podcast with Shaq, he addressed DG’s statements of Shaq losing in pick and roll. He mentioned, “I try not to get personal with people’s opinions. But however, Mr. Draymond, like you said, I would’ve torn your a** up on that block.” DG also claimed that Shaq might struggle in today’s game because of the technique it requires. But the latter also addressed this at the same time.

He said, “A lot of people don’t think I could play in this era. But a lot of people forget I was the first big, black guy to take it off the glass and go coast-to-coast. Giannis wasn’t the first, I was the first guy to do that. So when I was doing it, coaches were like, ‘Nah, nah don’t do it.’ Now, it’s accepted.”

There is no doubt that Shaq’s dominance in the NBA can ever be questioned. He changed the dynamic of the game so much that the league even had to enforce new rules especially because of the big man. As he said, he was one of the very first few players to drive the ball from one end of the court to another. With that said, it is clear that the former LA Lakers star had what it takes nowadays to be successful in the NBA.