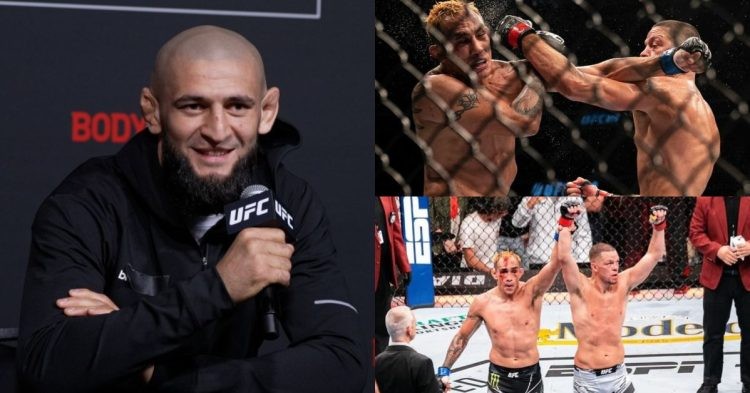 Khamzat Chimaev put on yet another clinical performance as he ragdolled Kevin Holland and submitted him via d’arce choke in the first round of the UFC 279 co-main event fight that took place a few hours ago at the T-Mobile Arena in Las Vegas.

Chimaev didn’t absorb a single blow and secured his fifth finish in the UFC. However, The Borz was supposed to headline the PPV against Nate Diaz but the UFC had to cancel the fight after Khamzat missed weight.

Following his brilliant first-round submission win over Kevin Holland, Chimaev went off on Diaz’s performance against Tony Ferguson in the UFC 279 main event. He also made a bold claim that Diaz was lucky to escape a beating.

“You see Diaz fight. So terrible that guy is. How he keep that pride I don’t understand. Thinking about they can win against me. That guy Kevin Holland tough guy stronger guy. He’s much better than Diaz you know like if him and Diaz are fighting then Holland will kill him you know. Diaz has to thank God he didn’t have to fight me.”

It is true that things could have been different if the scheduled bout between Khamzat Chimaev and Nate Diaz would have taken place. But in the end, despite the criticism of Khamzat against Nate, The Stockton Slugger performed really well and submitted Tony Ferguson in what was the last fight of his UFC career.

Khamzat Chimaev sat down for the post-fight press conference after his first-round submission win over Kevin Holland at UFC 279. During this press conference, one of the interviewers asked The Borz how he would feel if he doesn’t get a title shot next due to missing weight.

Chimaev believes that he’s next in line and should get the title fight as none of the top-ranked contenders has a win under their name. He explained further saying Covington has lost twice in a row to Usman and Masvidal’s last win came over Diaz back in 2019.

The Borz’s comments make sense given that he outclassed Gilbert Burns who is the next top-ranked contender. However, Khamzat will have to wait longer for an opportunity to get his hands on the title as Usman will get a rematch against Leon Edwards for the welterweight strap next.