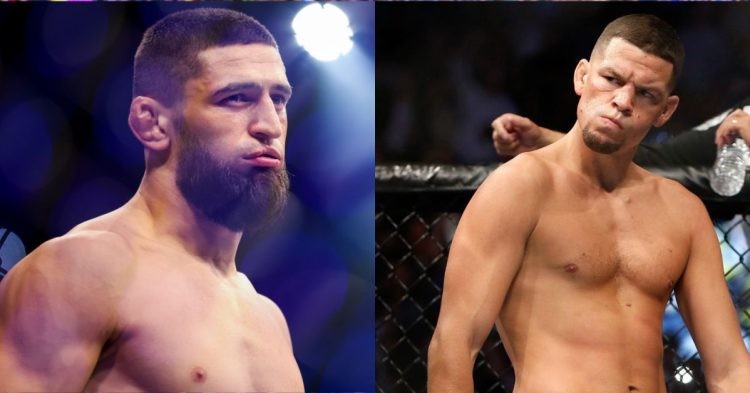 Khamzat Chimaev vs. Nate Diaz is ready to go down this weekend at UFC 279. This is the last fight in the UFC for Nate so it is safe to assume that he won’t be the one holding back anything before or during the fight.

Both Nate and Khamzat are some of the toughest brawlers in the promotion and given the history of both men things can go sideways before the fight or at the press conference. Chimaev is aware of Nate’s willingness to go to war anytime, anywhere and thus he will be expecting that if things get violent ahead of their fight.

The Chechen fighter stated in a recent interview with ESPN that he won’t back off if Nate or his team provokes him. Khamzat said:

“If they wanna fight before, f*** the money brother.”

“I’m gonna fight with them. I love to fight. It’s what I love. It’s my work to fight. I’ve been born for war. I’m inside a warrior. I don’t care. When the fights come, you don’t care about money or what’s behind it – just fight. We will see what happens,” Chimaev added.

Nate is notorious for his brawls and acts that often escalate into something violent. He was fined and suspended for his infamous brawls against Conor McGregor and Jason Miller in the press conferences.

In one of the most famous press conference fights, Diaz had an altercation with Conor McGregor before UFC 202. Diaz and his teammates infamously started a back-and-forth tossing of cans and water bottles with McGregor. As per the report, some people were injured and that altercation led to suspensions and fines for both Nate and Conor.

When Khamzat was asked what he expects of the press conference for UFC 279, which takes place Thursday in Las Vegas, he said he isn’t sure but he won’t be surprised if things go south.

Khamzat Chimaev is coming off a decision win against Gilbert Burns in April of this year at UFC 273, which earned the “Fight of the Night”. Meanwhile, Diaz has not fought in the Octagon since his loss to Leon Edwards in June of 2021 at UFC 263. Many fight fans are expecting to see Khamzat dominating the fight this weekend and retire Diaz.

When asked about Diaz’s lengthy career and the infamous McGregor vs. Diaz feud, ‘Borz’ admitted that he was a fan of both fighters at the time. He even went on to say who he thought Diaz should fight next after UFC 279. Khamzat said:

“I was 50/50. I liked them both at the time. Both guys were fun. I watched like, press conferences, everything. It was a cool fight. I watched the second fight as well, that was nice as well.”

However, Khamzat has the utmost respect for Nate and his accomplishments throughout his fighting career. Talking about Nate, he stated:

“I am a fan of Nate, if you’re not a fan what are you doing here… you have to look up to somebody.”

“That guy’s been at the top all his life. I look up to him and other guys and watch the fights and learn something, have fun and I like the guy.”

Speaking about the fight and what happens after this bout, Chimaev said that he wants to see one more fight between Conor McGregor and Nate Diaz before Nate leaves the promotion, a trilogy that all the fight fans have been asking for.