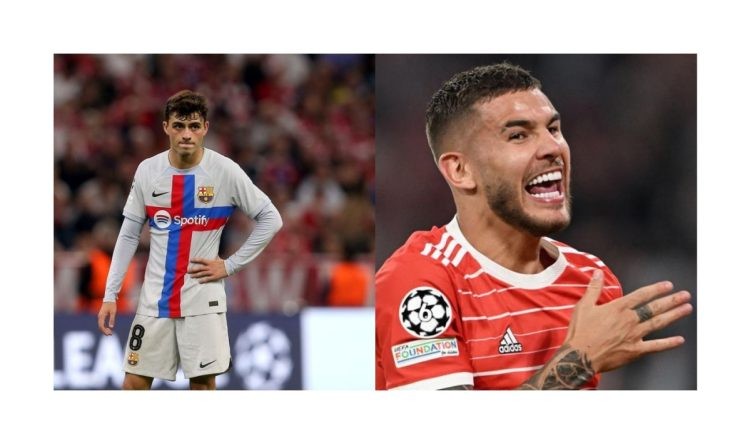 The Champions League matchday 2 saw two European heavyweights lock horns once again. Barcelona’s rebuild under Xavi had seen them go undefeated in the La Liga so far, sitting 2nd behind Real Madrid. Bayern on the other hand, have had a poor start to their season as compared to their domination in the past decade. They sit 3rd behind Union Berlin and Freiburg and are on the same points as Dortmund and Hoffenheim.

Bayern Munich have dominated this fixture over the past few seasons, with an unforgettable 8-2 win over the Blaugrana in Lisbon two seasons ago. Bayern scored 28 goals and won 8 out of the 11 matches between the sides. The match was billed to be a spectacular event and although the scoreline suggests a comfortable Bayern win, it was a very closely contested game. Speaking after the game, Pedri said ‘the result doesn’t tell the whole story’ and it is hard to disagree with this assessment.

Barcelona dominated the first 20 minutes of the proceedings, creating three big chances. Pedri’s shot from inside the box was saved by Neuer’s left boot in the 9th minute. Lewandowski spurned two big chances as well, shooting over the crossbar in the 20th minute and heading straight at Neuer a few minutes later. Bayern grew into the game later and 0-0 at halftime was almost unfair to Barcelona’s performance.

Bayern started off the second half very strongly and caught out Barcelona’s defense, with Lucas Hernandez heading home a delicious Joshua Kimmich cross. Sane and Musiala combined wonderfully on the right side and Sane danced through the defence to double the host’s lead. Pedri then had another glorious chance after the 60-minute mark. A wonderful one-two with Lewandowski saw him one-on-one with Neuer, only for him to clip the outer post. Barcelona shaded possession 53%-47%, and had more shots on target but failed to convert their chances into goals.

Speaking after the game Pedri said, “This result doesn’t tell the true story. Our first-half display merited much more than 0-0 at halftime. We had opportunities to go ahead, but if you miss against a big team like Bayern, you end up paying for it. Of course, if you fail to put chances away against a big rival like Bayern you’ll end up paying. They went ahead from our marking mistake at the corner. But it’s time to get on with things now – and to remember that we produced a very good first half.”

🎙 Pedri: The result doesn't really reflect what we saw on the pitch#BayernBarça | @ChampionsLeague pic.twitter.com/AriuHD5Rac

The result sees Bayern go top of Group C with 6 points. Barcelona sit 2nd with Inter at 3 points. Bayern faces Plzeń next and are expected to top this group come November. Barcelona face Inter next, another big game as both fight over qualification to the knockout stages.