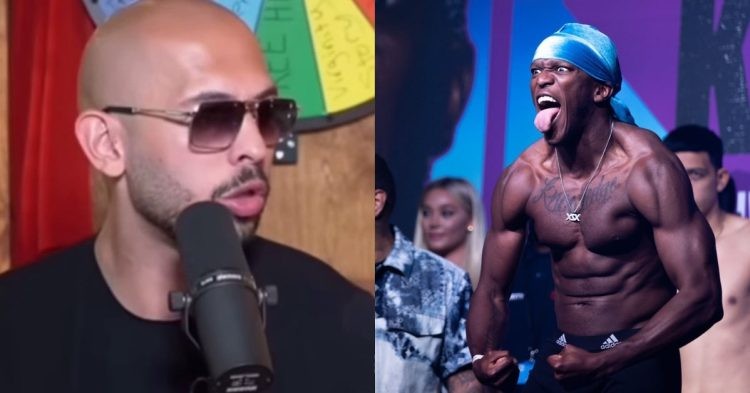 Andrew Tate is a firey character who does not shy away from speaking his mind. His latest victim is celebrity YouTuber turned boxer, KSI. In a recent video, Tate exposed the UK-based YouTuber and expressed his wish to face him in the boxing ring regardless of what happens in KSI’s upcoming bouts.

As the fans know, Tate has recently been de-platformed. He was already disallowed on Twitter, but social media platforms like Instagram, Facebook and TikTik have also followed suit and banned the former kickboxer from their platforms. Some of his past comments were very demeaning towards a certain section of the population. Hence, the corporations decided to get rid of him.

KSI recently stated in a deleted tweet that he was happy about Andrew Tate’s banishment from social media platforms. But Tate did not take the comments lightly and came back with receipts of his own. He pointed out some of KSI’s past videos which are extremely alarming.

Tate even gave credit to Jake Paul for sticking up for the right of free speech. He also thinks Jake will run through the UK-based celebrity boxer if they fight.

“At least Jake Paul was man enough to say, ‘stand up for free speech.’ If you ever fought Jake, he’d smash your f****g face in. If you wanna get smoke twice, I’ll smoke you myself.”

Andrew’s message was clear. He called out KSI’s double standards and stated that he wants to meet KSI in the boxing ring.

“You’re full of sh*t, you’re a f****g hypocrite. The shit you’ve said in the past is worse than anything I’ve ever f****g said and you know it. You’re talking about having a boxing match, your f****g 3 rounds (of) boxing and some nobody.”

TODAY IS THE DAY YOU SEE ME KO 2 PEOPLE IN 1 NIGHT pic.twitter.com/Oldr6wd8wt

KSI is set to make history on August 27th inside the O2 arena in London. He will face two opponents on the same night. At first, he will go up against Swarmz who is a footballer turned musician. Depending on the result of that fight, he will then proceed to fight Luis Alcatraz Pineda in a three-round bout.

Andrew Tate was in talks to fight Jake Paul

Jake Paul was supposed to fight Hasim Rahman Jr earlier. But due to a dispute regarding Rahman’s weight, the bout got cancelled. So Jake’s event on August 6th inside Madison Square Garden (MSG) had to be cancelled as there was no opponent for him to fight.

Just when it seemed like fans will have to wait for a long time to see Jake back in action, the rumours of him calling out Andrew Tate started. Although Tate’s camp initially dismissed the report, it was evident that there clearly was something brewing. Then Andrew himself came out and confirmed that there were negotiations going on.

However, things have changed significantly. The bout does not make as much sense as it did a few weeks ago. One of the biggest tools for promotion, social media, is now unavailable for Tate. Now it seems like KSI is gunning for the fight. So it remains to be seen what happens with Andrew Tate next.