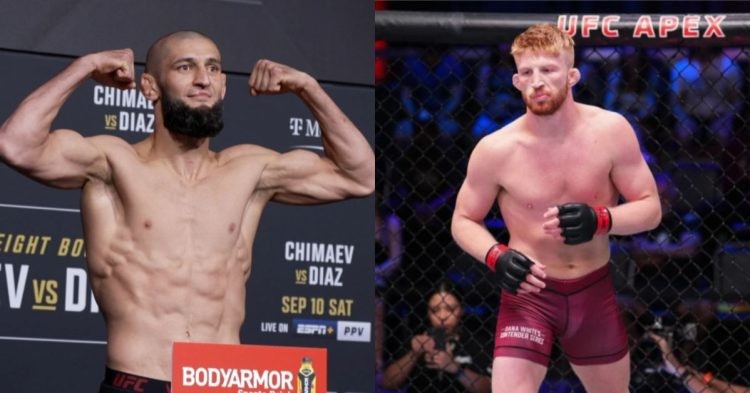 Three-time NCAA champion wrestler and recently inducted UFC middleweight Bo Nickal has lately become the hottest topic of discussion in the entire UFC roaster. Nickal was already a hype train even before showcasing his skills under the UFC banner in DWCS, and when he finally got the opportunity to do so he exceeded everyone’s expectations by finishing both of his opponents in no time.

Now, Nickal is all set to make his UFC debut at UFC 282 against Jamie Pickett. But even before getting past his first hurdle in the UFC, Nickal has already started to call out big names like Israel Adesanya and Khamzat Chimaev, Especially Chimaev. Although UFC President Dana White has rubbished the idea of Nickal fighting Chimaev anytime soon, Nickal doesn’t seem to be backing down on his demand.

In a recent interview with Ariel Helwani, Nickal ripped through Chimaev saying that him missing the weight by 7.5 lbs was highly unprofessional and that Chimaev is not committed to the sport as he is. Nickal’s said “I just think, first off, this dude talks about he’s ready to go always, he’s a gangster, this and that — bro, you can’t even beat the scale,” Nickal said on The MMA Hour. “What are you doing? This is just a dude that has no accountability and doesn’t treat the sport professionally. That makes me way less nervous to fight him in the future, because we’re going to fight. I know he’s not committed like I am. He’s not willing to do the things that I’m willing to do.”

Nickal’s further added “What’s he going to do to me? Is he going to take me down? No. Is he’s going to submit me? No. Does he have a chance to knock me out? I guess, yeah, there’s a chance he knocks me out. But reality, more than likely what will happen is I’m going to drag him down to the ground, do exactly what he does to all these strikers and I’m going to do it to him. When that fight gets announced and he signs on the dotted line, he’s going to have eight weeks to train but it’s already going to be too late. Because I’ve been training since I was 5 and I’m ready for this.”

How would Bo Nickal matchup against Khamzat Chimaev

One of the biggest reasons current and former fighters like Anthony Smith and Henry Cejudo believe that Bo Nickals can beat Khamzat Chimaev is because of his wrestling pedigree. Nickal’s wrestling abilities were on full display in his two fights at DWCS. Former Olympic and two-division UFC champ Henry Cejudo says “Chimaev thinks he’s good in wrestling – his wrestling is nowhere near Bo Nickal, I can tell you that. He can take down these UFC guys that have never wrestled. Try taking Bo Nickal down, and 100 percent I can see Bo Nickal easily taking down Khamzat Chimaev.”

Apart from his fight against Gilbert Burns, the number three ranked welterweight contender Chimaev has shown the same level of domination against every other opponent. He is considered to be one of the best wrestlers on the entire UFC roster. Till now no one has been able to bear the pressure Chimaev imposes, even a high-level grappler like Kevin Holland tapped out to Chimaev in less than three minutes. Nickal stylistically is a bad matchup for Chimaev but it doesn’t seem like that fight is happening anytime soon.