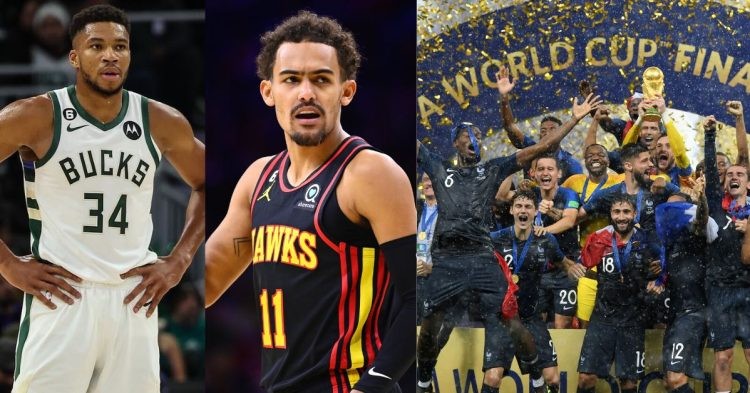 The FIFA World Cup 2022 has started and it has not disappointed so far. As the countries fight to win the prestigious golden trophy, NBA players have predicted who will win it. Many players have supported soccer players in the past. One huge example of that would be the time when LeBron James rooted for the Liverpool FC players, a team he owns.

The players appeared on a video for NBA Europe and picked names of countries at random. There were some interesting and fun picks in there as the league’s finest revealed who they want to see win the World Cup.

When Giannis Antetokounmpo was about to pick a team randomly, he mentioned, “Please give me France”. Before that, he said that France superstar and 2018 FIFA World Cup winner Kylian Mbappe had his support. It is no secret that Giannis admires the sport of soccer as well, as he hails from a great nation; Greece. The country has appeared at the World Cup on three occasions till now.

Giannis met Mbappe a couple of years ago when the latter visited the Milwaukee Bucks. It was the time when the Bucks played against the Charlotte Hornets in Paris. Giannis exchanged basketball sneakers for soccer cleats with the PSG superstar, as the pair gifted each other a signed pair. Given their friendship, it isn’t surprising that Giannis picked Mbappe and France. He enjoyed a laugh with Neymar Jr as well.

However, fate had something else planned for him, as he picked Cristiano Ronaldo‘s Portugal. Giannis said, “Woah not bad! Portugal. Cristiano Ronaldo… I’m gonna root for Portugal. I like Portugal. Portugal is not bad.” The Seleção kickstarted their World Cup campaign in style last night after beating Ghana 3-2 after a thrilling game.

Another NBA star who also took part in the prediction video was the face of the Atlanta Hawks franchise; Trae Young. The 24-year-old predicted that Kevin De Bruyne’s Belgium would take home the World Cup trophy this year. The European country finished third in 2018 in Russia.

Apart from that, Chicago Bulls’ Zach LaVine predicted that Lionel Messi would finally get his hands on the trophy, while Khris Middleton backed the Netherlands to win the tournament, claiming he has full confidence in them.

The World Cup is the most famous tournament in the world, and the world watches as countries want to be the last ones standing. But who will take the trophy home?