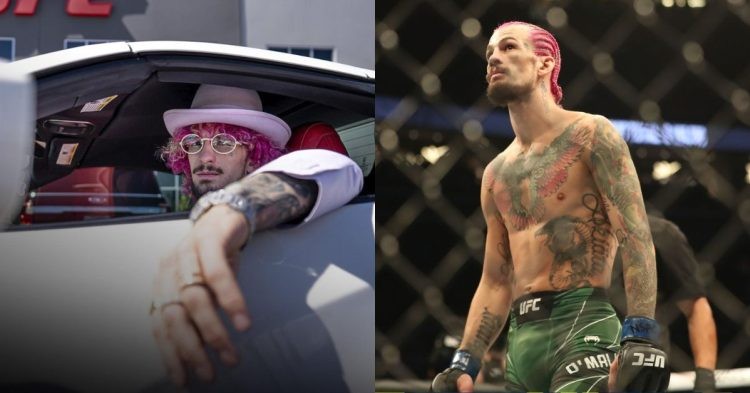 One of the most flamboyant fighters in the UFC, ”Sugar” Sean O’Malley is all set to take on the former bantamweight champion Petr Yan at UFC 280 in Abu Dhabi on October 22nd.

Number twelve-ranked UFC bantamweight contender Sean O’Malley, in an interview with Chris Van Vliet talked about his UFC salary and how much more he makes outside of MMA with YouTube, Twitch, Instagram, and the merchandise he has created.

O’Malley said “I’m a finisher, I knock people out that’s what I do and that’s what the fans want to see. That’s why I built a name for myself, I’m an entertainer some people are just fighters you know, they’re not making the money I’m making outside the UFC. I‘m getting paid from merch YouTube, Twitch, Tik Tok, Instagram like I’m making six figures easy sometimes six figures a month, not even from fighting.”

Sean O’Malley has achieved a status in the sport that many ‘champions’ dream of. His flashy lifestyle and crazy knockouts inside the cage have earned him that spot.

Over the years O’Malley has created a strong presence in social media through his charismatic personality. As of now O’Malley has over 2.5 million followers on Instagram and half a million subscribers on YouTube. He also streams games on twitch and connects with his fans.

O’Malley also owns a company that sells hoodies, jerseys and other apparel. O’Malley is a smart guy and his smartness isn’t limited inside the octagon.

How is Sean O’Malley preparing for UFC 280?

Fighting Petr Yan is a massive step up in competition for O’Malley. Yan by many is considered to be one of the best strikers in the entire UFC roaster. Although O’Malley himself is an elite-level striker and has overwhelmed almost every opponent he has fought with his power and accuracy.

But one department he lacks in is experience. Yan, a former world champion has fought experienced and high-level fighters like Cory Sandhagen, Jose Aldo and Jimmy Riviera while O’Malley is yet to register a win against a top-ten bantamweight contender.

Fighting Petr Yan is a high-risk high reward fight for O’Malley, a defeat at this stage of his career will derail the hype he is carrying around but if O’Malley is somehow able to beat Petr Yan, he will enter a whole new level of success, and stardom at just 27 years of age.

“I Am a Little Pissed, Little Down”- Henry Cejudo Admits He Might Never Fight in UFC Again After Dana White’s Decision