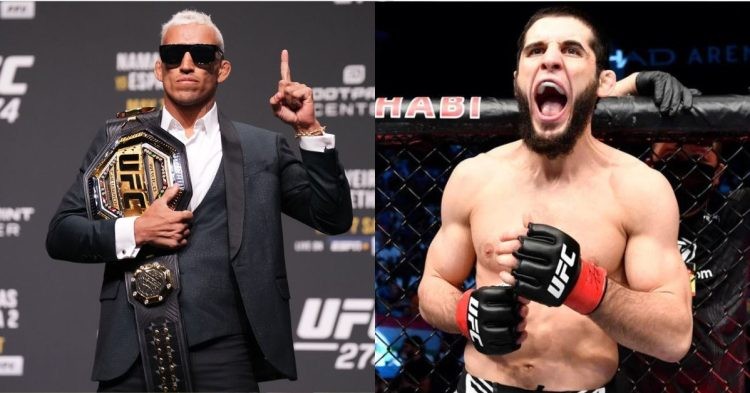 Charles Oliviera is all in for a grappling battle against Islam Makhachev ahead of their mega-fight for the vacant lightweight title on October 22nd at UFC 280.

Going into the fight, Oliviera certainly holds a massive advantage in the striking department but not so in grappling. Although Oliviera himself is an elite jiu-jitsu specialist, many consider him to be inferior if the fight grows into a grappling contest. Makhachev with his ‘Sambo’ style wrestling could prove to be a big hassle for him on the mat. Oliviera though looks unafraid of the challenge ahead.

In a bold statement, Oliviera said “I will defend the takedowns and it doesn’t matter if he takes me down, I’m gonna use my jiu-jitsu and always look for submissions. Islam has always fought guys who were afraid of getting taken down, you can see it in the guy’s eyes when he’s scared. When the guy is afraid of being taken down, he doesn’t let his standing game loose because he’s afraid to throw a hand or to kick and you take him down. Not me.”

Oliviera further assured that he will continue to fight the way he does and won’t let Makhachev’s pressure disrupt his game plan “I’m not afraid of getting taken down. I will be 100% prepared to defend takedowns, to throw punches, knee, kicks. What he does best, which is taking down, will he take down the greatest finisher in UFC’s history? I’m the biggest problem in this division.”

Who is Charles Oliviera training with for his Wrestling?

Charles Oliviera is seeking assistance from an Iranian wrestling champion Alireza Noei, who claims to have faced much better wrestlers than Khabib and Islam, Noei also claims to have trained and competed in Dagestan for five months. It’s pretty clear that Oliveira is deadly aware of the threats Makhachev possesses on the ground and hence is giving extra emphasis to that department. Islam Makhachev is certainly the toughest test Oliviera will face inside the Octagon and it seems like he is putting in the work accordingly.

Up until now, Oliviera has secured a victory against every wrestler he has fought except Frankie Edgar who didn’t wrestle much and used mostly boxing to win that fight back in 2013. Over the years Oliviera has drastically improved his striking as well as the grappling game and has outclassed almost every opponent on the ground.

The overriding theme for this fight has been how Oliviera’s jiu-jitsu will fare against Makhachev’s Sambo-style Dagestani wrestling. However, both Oliviera and Makhachev have significantly improved their striking in recent fights, but there is something about the Dagestani wrestlers that make them stand out.