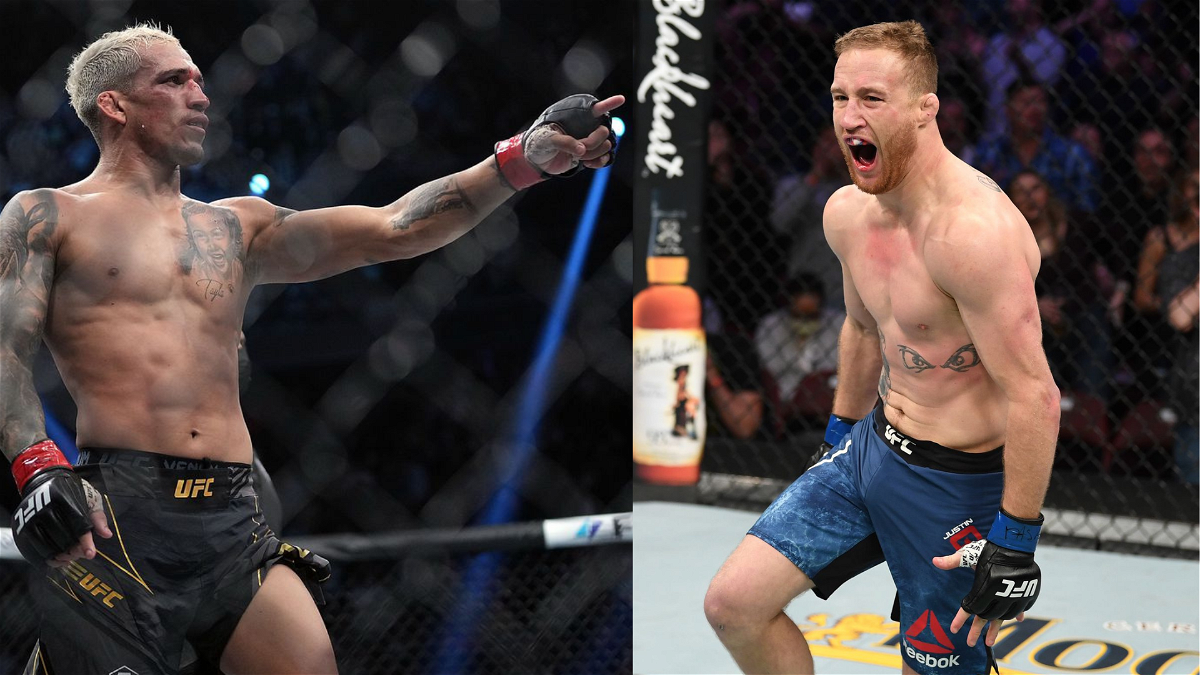 UFC Lightweight champ Charles Oliveira will be defending his title against the most violent lightweight in UFC, Justin Gaethje in his next outing at UFC 274 main event. And we are very certain that this will be a war.

In a recent interview, Charles Oliveira assessed that he is confident in his striking going into his title defense against Gaethje. He said that he is not nervous anymore about going into the fight against the big names like he used to be in his earlier days.

“I think I’m a step above the lightweight division. Mentally, physically, spiritually. I’m not nervous anymore,” said Oliveira during a recent interview.

‘Do Bronx’ believes that he has enough power in his hands to trade against one of the most violent strikers in the sport. It is no secret that he is ranked among the best submission artists on the planet. But Oliveira has improved his stand-up game very much in recent years. He has proved his worth as the lightweight champ against the best men in the division so far.

“I’m an MMA fighter. I’m not a jiu-jitsu fighter anymore. I trade punches, fight on the ground, wrestle with anyone.”

“An uppercut, a hook, and a calf kick, that’s what he has. As for me, I have the knee, I have the elbow. I do different things in the fight. Flying knee, front kick, if I can’t take it down, I’ll hit it with my elbows.”

Oliveira stated that he is not the same guy anymore who used to rely only on his jiu-jitsu to win a fight, but he has evolved into much of an all-rounded guy. He has added many weapons to his arsenal and believes he can beat Gaethje.

Charles Oliveira is the best lightweight in the world at present. He fought some dangerous strikers like Tony Ferguson, Dustin Poirier, and Michael Chandler and beat them all. Ahead of his second title defense at UFC 274, the question remains if he can withstand the devastating striking of Gaethje.

Whereas Justin Gaethje is one of the most violent and aggressive fighters in the history of the sport, Oliveira is also certain about the firepower in his hands to stop ‘The Highlight’.

“Dustin Poirier also knocked out Gaethje. Me and Justin had a war in the 1st round. I took one KO, and I fell to the floor and got up quickly.” Oliveira said.

“So who’s really heavy-handed? We don’t really know. We’ll only know when we fight.” ‘Do Bronx’ concluded.

‘Do Bronx’ knocked out Chandler with his left hand in his title fight, a feat that Justin couldn’t achieve in 3 rounds. He also went toe-to-toe with one of the best boxers on the roster, Dustin Poirier.

The lightweight champ has also promised to make this fight into a war. And he won’t be backing off in the first round. Both fighters are too unpredictable while fighting, and that’s exactly what will make this fight so exciting to watch.