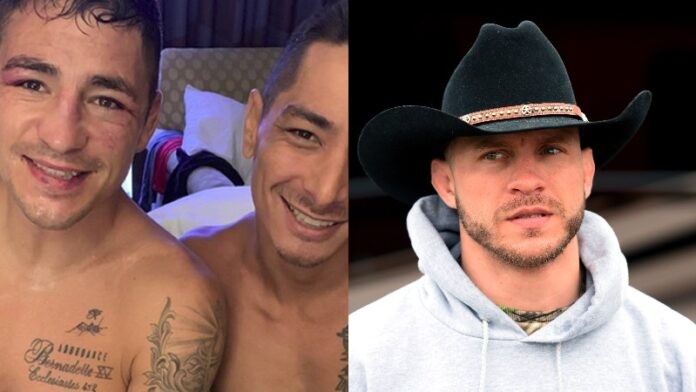 UFC Vegas 26 marks the return of UFC veteran, Donald Cerrone who will take on Alex Morono in the co-main event. However, Donald Cerrone was originally scheduled to take on Diego Sanchez in a much-anticipated fight.

But, UFC canceled the bout between Sanchez and Cerrone and decided to release Sanchez immediately. It’s a well-known fact that Diego Sanchez’s coach Joshua Fabia was a significant factor in UFC’s decision to release the Ultimate Fighting champion season one winner.

Joshua Fabia has been a controversial figure in the MMA community and many fighters, as well as fans, have openly criticized him for his actions. Since Sanchez started training with Fabia there have been significant changes in his performances inside the octagon. The training style of Joshua Fabia is completely unusual and seems ineffective judging from Sanchez’s last few performances.

Well, after listening to Donald Cerrone’s story about Joshua Fabia getting involved in a bar fight fans might raise some questions on Fabia’s credibility as a mixed martial arts coach.

In the pre-fight media day for UFC Vegas 26, Donald Cerrone recalled the time Joshua Fabia got into a bar fight. Cowboy revealed that the outcome did not go in the favor of Fabia and his self-proclaimed “The Death Punch” did not work during the fight. Cerrone recalled:

“I do know the guy that whipped his a** at the bar. I used to train with the guy and that kid was talking about his ‘death punch’ and how he was gonna kill the dude and my buddy dog walked his motherf—king ass all over the bar. So… the death punch did not work. It was unsuccessful. And this guy no longer fights, no longer trains, and just said ‘Man, I’ll beat your ass,’ and he did. The MMA community in New Mexico had a chuckle over it.”

Before the fight, there was some beef between Donald Cerrone and Diego Sanchez after Sanchez promised to retire Cerrone. However, after Sanchez’s UFC release, Cowboy is not holding any grudges with the UFC veteran. Cerrone stated:

“It’s hard to be mad at him now because I don’t know if it’s him guiding the horse. I think he’s just running blind in this other Jumoke, his new lover is like showing him down the path. So I don’t know … I can’t really be mad at the kid you know? Or the old man I should say but really. It’s his cult leader and lover that took over his life and I feel bad for you. Diego.”

Read More: WATCH what happens when a fan tries to pick a fight with Donald Cerrone