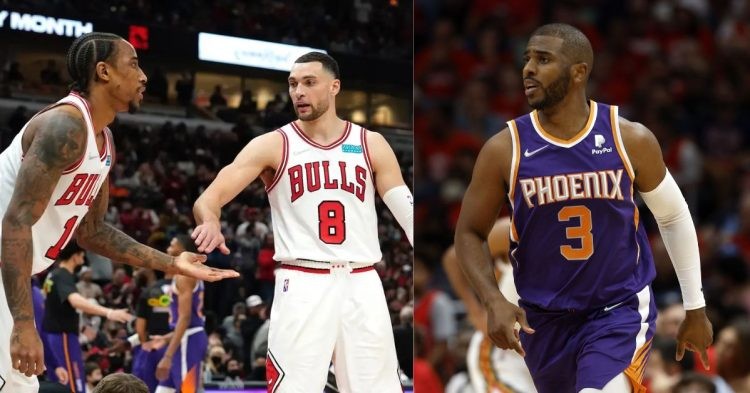 Chris Paul’s Phoenix Suns will be facing Zach LaVine, DeMar DeRozan, and the Chicago Bulls tonight. Despite not having their veteran leader for many games, the Suns are off to a great start this NBA season. Led by Devin Booker and Deandre Ayton, they hold a record of 14 wins and 6 losses. This gives them the 1st seed in the Western Conference.

They will play against the Bulls, who are still struggling to get into good positioning in the Eastern Conference. The Bulls are currently at 9 wins and 11 losses, placing them 12th in the conference.

With that being said, we should take a look at the injury reports and expected rosters for the Suns vs Bulls game. One might also want to know whether the point god is expected to return and which other players are expected to miss this game.

Unfortunately for CP3 fans, he is not expected to play in this game for the Suns and is listed out. Chris Paul injured his heel and has no clear timetable for return. NBA fans will remember this occurred in a game against the Philadelphia 76ers.

As we can see, CP3 injured his heel when going after the ball in the second quarter of the game. He limped off the court and has not played since then. Thankfully, the Suns didn’t lose much momentum in the absence of their leader.

Their coach Monty Williams managed to coach the team to the NBA Finals and knows what they are capable of doing. Even without Paul. He will be relying on the others to step up and continue performing at a high level against the Chicago Bulls.

Let us take a look at the injury reports and expected rosters for both the Phoenix Suns and Chicago Bulls as they face off tonight.

As we can tell, Chicago is missing both Lonzo Ball and Alex Caruso along with others. That is an explanation for their slow start this season. Finally, let us take a look at the predictions for this game.

The Suns are favored over the Bulls in this match

Lonzo Ball and Alex Caruso might not be what Chris Paul is to the Suns. However, they certainly bring a lot to the table that the Bulls will miss in this game. Especially on the defensive end of the court as both of them are excellent defenders.

Devin Booker is coming off an incredible 44-point game in a win against the Sacramento Kings. He will be looking to prove that the Suns are a very real threat even without CP3. Defeating the Chicago Bulls will bring more legitimacy to this notion. Phoenix will be favored to win this match against Chicago.
Tags: Chicago BullsChris PaulNBAPhoenix Suns
Previous Post