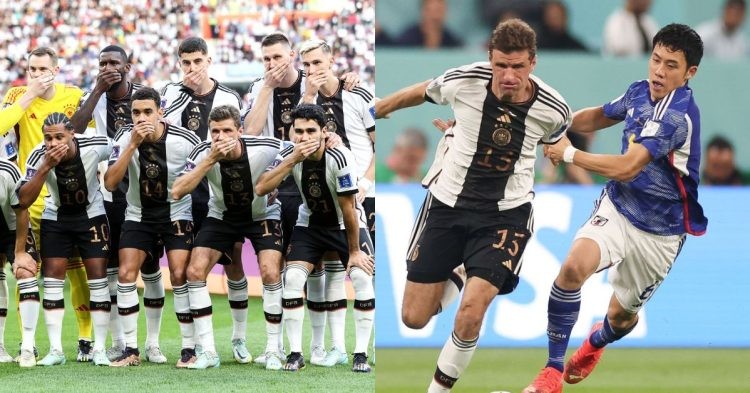 The FIFA World Cup seems to be getting interesting as time passes. We have seen another upset today after Japan beat 2014 world champions Germany 2-1. It wasn’t the result many soccer fans expected, considering Germany’s star-studded lineup. Before the game, they covered their mouths for the team photo, raising many eyebrows.

Germany dictated the game as they would aim to do so. However, the issue rose when they couldn’t capitalize on their chances. According to OneFootball, The European nation had 73.8% of the possession, and had 26 shots at the goal, landing only 9 of them. On the other hand, Japan had 4 shots on target after taking 12 shots in total.

The numbers show that Japan wasn’t having much of the ball, which is quite surprising considering they won. The difference between the two teams was when Ritsu Doan came on for Ao Tanaka. The Japanese soccer player equalized just four minutes later. This was before Takuna Asano’s winner in the 83rd minute.

Given that they lost their game today, are they still in the tournament? Do they still have a chance?

Will Germany crash out of the group stages once again?

As we all know, the Germans went out of the 2018 FIFA World Cup after the group stages. They began their World Cup campaign that year with a 1-0 loss to Mexico, thanks to a winner from Hirving Lozano. This time around, the same has happened.

Despite what their haters might claim, Germany is still well and truly in the tournament. They still have a good chance to make it to the knockout stages. However, their defense has been looking shaky at times. Against Japan, captain Manuel Neuer tried to keep the opponents at bay. The first goal for Japan was from a rebound when Germany’s defenders failed to clear the ball in time after Neuer saved it.

Moreover, Germany were not been able to break down Japan’s defense. Despite having the ball more, Die Mannschafft could not find that defense-breaking pass. It looked like they missed Toni Kroos. The Real Madrid star has been instrumental for Germany and his club. In the last World Cup, he scored a beautiful free kick against Sweden in the last minute to give Germany the win.

The country is in Group E with Spain, Costa Rica, and Japan. The entire soccer world knew that this was going to be a tough group, given that all the teams were quite good. With that said, fans expected Germany to finish in the top two of the group as well.

If we’re being honest, Germany still has a chance to do that. But they would have to overcome a huge obstacle in Spain. The 2010 FIFA World Cup winners are looking comfortable and dangerous heading into the tournament this year.