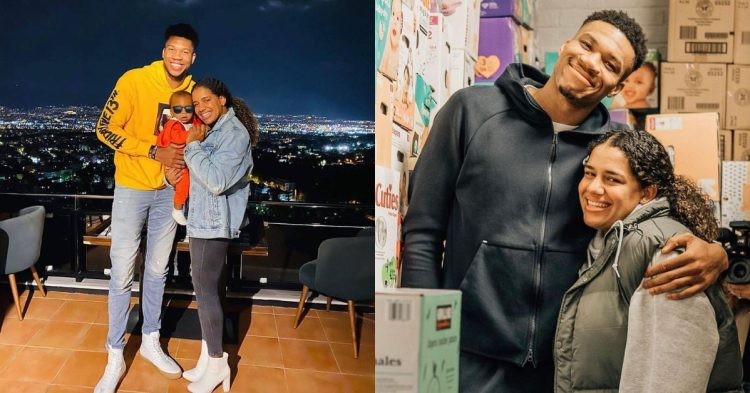 Giannis Antetokounmpo is one of the best basketball players of this generation. The Greek Freak apart from being a freak on the court is also a self-proclaimed freak in the sheets. He has been dating his girlfriend Mariah Riddlesprigger for several years now. The two of them also have two sons together. Liam Charles Antetokounmpo and Maverick Shai Antetokounmpo.

If you didn’t already need another reason to love Giannis, here’s my favorite story —

Rookie year, Giannis sent all his money back to Greece, so much so that he ran out, couldn’t afford a taxi, and needed to be driven to a game by a random person.

Back when Giannis was in his rookie year, he sent all his money back to his family and forgot to keep enough for a cab. He was later seen running through the town of Milwaukee to reach the arena for his match. Some fans going to the match recognized him and offered to give him a ride to the arena. Let’s dive deeper into Giannis’ relationship with his longtime girlfriend Mariah Riddlesprigger.

She attended Bullard Highschool as a teenager, it was in high school that Mariah started to show off her potential for volleyball. Mariah won the MVP award for volleyball in her senior year of high school. Post this she eventually went to Rice University, Texas for her college and went on to play volleyball for them. She was often appreciated for her college career and even took the team on a 6 game-winning streak one time back in 2012.

Eventually, in 2014 she graduated from Rice University with a BA degree in sports management and sociology. Mariah may have had a very promising volleyball career, but she had different plans.

Despite having excellent grades and being known in her state for being an amazing volleyball player, Mariah eventually went on and landed an internship for the Philadelphia 76ers.

She is also a big personality on Instagram and has a following of 135k, her posts usually contain pictures of her with Giannis and their kids. Apart from that she sometimes uses her platform for noble causes as well.

When did Giannis Antetokounmpo and Mariah Riddlesprigger meet?

The meeting of Giannis and Mariah is actually a very interesting event. Mariah started her NBA internship for the 76ers back in 2014. This was the time when Giannis was only in his sophomore year. He was yet to make any real noise In the league at that point. Mariah on the other hand was still working as an intern. Now, it was hard for Giannis to miss the 5’10 young queen that Mariah was at that time.

The two of them met during her internship and have been together since then. When they met, Giannis was just an interesting prospect, yet she stuck with him. Today, Giannis is an NBA champion and one of the best basketball players in the world. The two of them have shared everything with each other, through thin and thick.

Today, the two of them even run a diaper drive. Being a parent has made them realize how expensive it is to raise kids. So, every once in a while the two of them buy some essentials like diapers, and formula, and wipe and give them out to the community. The growth that Giannis, Mariah, and their relationship have shown within the past few years has truly been inspirational.

An in-person diaper drive hosted by Giannis Antetokounmpo and Mariah Riddlesprigger to support @MKEdiaper is taking place today in the Deer District!

Giannis being the amazing basketball player that he is will surely only continue to improve and take things further. All that’s left for the two of them is to tie the knot, which is something that the fans have been wanting for a long time now.