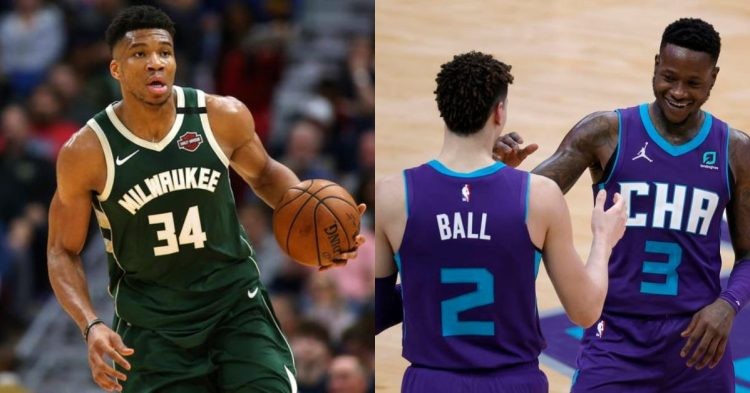 The Milwaukee Bucks will host the Charlotte Hornets on Friday night at Fiserv Forum. This will be the second out of three matchups between these two teams this year. The Bucks will enter this one with a 2-game winning streak while the Hornets look forward to end their 3-game losing streak as they sit at the bottom of the Eastern Conference standings.

The Bucks managed to sneak out a close win against the Raptors in overtime on Wednesday, behind a monster 30-point triple-double by Giannis Antetokounmpo, who is averaging close to 33 points per game for the season and is once again in the MVP race.

The Hornets, on the other hand, have lost 4 of their last 5 games and continue to be in the mix for a lottery pick as the season goes on.

The 2x MVP continues to perform at the highest level for the Bucks, even without his co-stars Khris Middleton and Jrue Holiday. Middleton continues to deal with a sore right knee and is ruled out for this game. Holiday, who is still conditioning back into game situations, is listed as probable. Apart from them, first round draft pick MarJon Beauchamp is also listed as probable for tonight’s game along with Giannis.

The Bucks would most likely want to rest their star player as they have a 4-game road trip coming up right after this game.

The Bucks have submitted an injury report for Friday’s game vs. Charlotte.

For the Hornets, Kelly Oubre Jr. will NOT be playing tonight as he recently underwent surgery to repair a torn ligament in his left hand. He has been the leading scorer for the Hornets this season, averaging 20.2 points per game.

The Milwaukee Bucks are favored to win against the Charlotte Hornets

Even though the Bucks are short-handed, this game should still be a cakewalk for them as they still have enough firepower to get the win. They defeated the Hornets the last time they met in December, in which even though Giannis played fewer minutes, Bobby Portis came up huge with 20 points, 7 assists, and 8 rebounds to secure the W.

For the Hornets, this one will surely be a tough nut to crack as they will also surely miss their leading scorer. Let us know who you think will win tonight’s game.