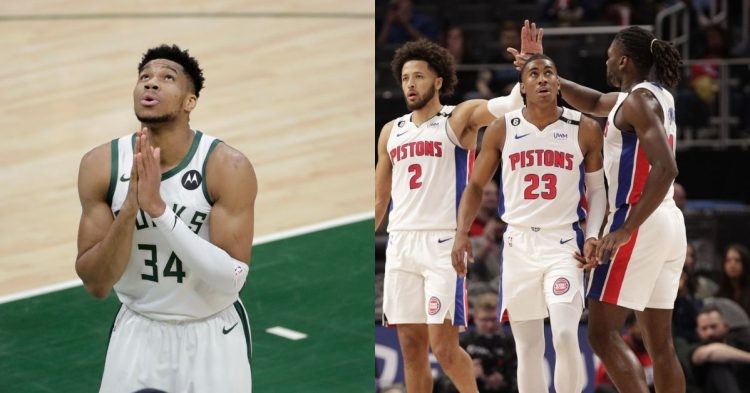 The Detroit Pistons make a quick stop at home before heading back on the road as they host the Milwaukee Bucks at the Little Ceasers Arena tonight. This will be the third of four annual matchups between these two teams. The Pistons will enter this one with a 12-36 record, having lost 4 of their last 5 games.

The Bucks, meanwhile, continue to do well as a team this season. They currently hold the 3rd spot in the Eastern Conference with a 29-17 record. Their last game was a loss against the Cleveland Cavaliers on January 21, with a final score of 102-114. Evan Mobley erupted for a career-high 38 points to go along with 9 rebounds as the young Cavs beat the Giannis-less Bucks.

On the other hand, the young and short-handed Pistons squad has struggled so far this season. They currently sit dead last in the Eastern Conference standings, also having lost their last game against the Chicago Bulls 108-126, which was played in Paris, France.

Giannis Antetokounmpo has been playing at a high level yet again this season. Having played in 35 games this season so far, he is averaging an impressive 31/12/5. He had been out of the lineup since January 11 with knee soreness but is listed as probable for tonight’s game. Along with him, all-star guard Khris Middleton, who had also been sidelined with a knee injury since mid-December, is listed as probable for tonight’s contest.

Apart from them, forward Serge Ibaka remains out for tonight’s game as he and the Bucks continue to find trade opportunities for him.

For the Pistons, they will be severely short-handed in tonight’s game, missing the services of forwards Isaiah Stewart (shoulder) and Marvin Bagley III (hand), and guards Cade Cunningham (shin) and Buddy Boeheim (toe) all of whom remain out for tonight’s game. French guard Killian Hayes is listed as questionable for tonight’s game with a left shoulder contusion.

Here are the injury reports and expected roster for the Bucks-Pistons game tonight:

The Milwaukee Bucks are favored to win against the Detroit Pistons

The last time these two teams faced off against each other, the Milwaukee Bucks secured an easy 116-91 win. Giannis recorded a double-double with 32 points and 12 rebounds in that game. For the Pistons, forward Saddiq Bey scored a team-high 22 points in that game. That win put the Bucks 2-0 in the 4-game season series against the Pistons. Tonight, that result is likely to repeat.

With Giannis and Middleton hoping to be back in the lineup and the Pistons being short-handed, expect an easy win for the 3-seeded Bucks. However, the young and energy-filled Pistons might still put up a solid fight.

“No, What Do You Mean? It’s Mine” – Lionel Messi Gets Frustrated as TV Presenter Attempts to Discredit His Goal