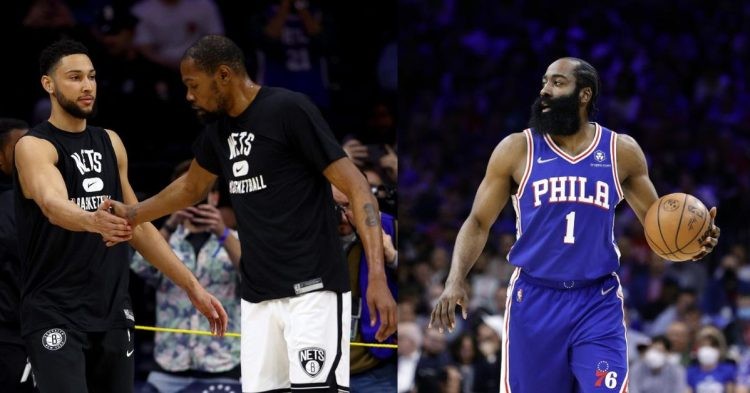 The Philadelphia 76ers will be facing the Brooklyn Nets tonight. Both these teams have gotten off to a slow start this NBA season. The Nets currently hold a record of 8 wins and 9 losses. Similarly, the 76ers are at 8 wins and 8 losses.

This is quite surprising considering the amount of talent that both these teams have. NBA fans will remember that the Nets traded their James Harden to the 76ers in return for Ben Simmons. In a way, the winner of this game will indicate which side won this deal.

We need to know the availability status of the players and the potential rosters. What’s more, we should have an understanding of the context for this match and the expected predictions.

Unfortunately for 76ers fans, Harden suffered a tear in his right foot’s tendon. As a result, he is expected to miss a full month of the NBA season. The Beard will not be playing in this match against his former team, the Brooklyn Nets.

Joel Embiid was putting up staggering numbers in his co-star’s absence. However, even he went down to with a calf injury in the game against the Minnesota Timberwolves. It was just an accidental play. Nonetheless, his reaction shows us the severity of the injury.

Since both the 76ers stars are unexpected to play, we should wonder which players will have to step up and what rosters both sides will end up utilizing in this match.

The Nets will also be missing their center Claxton. He has been diagnosed with a non-covid illness and is listed as questionable for this game. Finally, let us take a look at the predictions for the Nets-76ers game tonight.

There is simply no other way to say it. Considering that Harden, Embiid, and Maxey are not playing, the 76ers lineup doesn’t have a single star in it. Therefore, they will certainly be the underdogs in this matchup despite having a better record.

This game will also be a chance for Ben Simmons to showcase what the 76ers called out and gave up on. He has certainly improved his performance over the past few games. Moreover, if Embiid and Harden don’t play, it would be foolish to bet against Durant, Irving, and Simmons.
Tags: Brooklyn NetsJames HardenNBAPhiladelphia 76ers
Previous Post