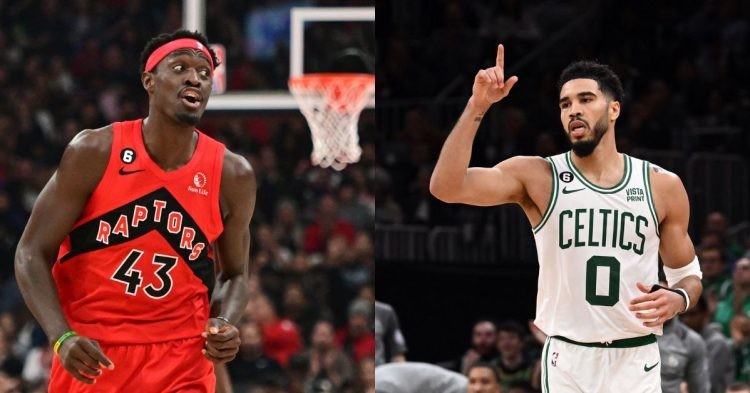 The Boston Celtics will be facing the Toronto Raptors tonight. The runners-up of last year’s finals are coming off a win against the defending champions, the Golden State Warriors. Hence, we can claim that spirits are high in the Celtics locker room, as well as the team’s morale going into the game tonight.

The Raptors have a record of 20-26 in the league this season as they sit in 11th in the East. The Celtics, on the other hand, are at the top of the East, with five more wins than the Milwaukee Bucks too! It certainly looks like the Celtics are the favorites for tonight’s game, but their injuries might change the outcome of the result.

Celtics superstar Jayson Tatum will be missing the game against the Raptors tonight due to left wrist soreness. This surely is not the news that fans would have been waiting for, especially after his phenomenal performance in the last game against the Warriors. Apart from Jayson, Danilo Gallinari is also on the Celtics’ injury report and is listed as out due to a knee injury.

The bright side of things that Celtics fans might want to focus on is that Jaylen Brown is expected to return for the game tonight. He did not play against the Warriors due to an adductor injury that kept him out for a while.

Can the Celtics win against the Raptors without Jayson Tatum?

Tatum has undoubtedly been the Celtics’ best player this season. He has averaged 31.2 points, 8.5 rebounds, and 4.3 assists this year in 44 games. His absence will be duly noted tonight. All eyes will be on Jaylen Brown to step up for the Celtics tonight.

The last time the Raptors faced the Celtics was in December 22. The Boston-based franchise took the win thanks to 22 and 18 points from Jaylen and Marcus Smart respectively. Celtics fans will be hoping that the same is repeated tonight. The Raptors are on a two-game losing streak right now, and we can predict that it might continue tonight.

One might argue that Jayson Tatum’s absence will tip the scale in the Raptors’ favor, but the last time the Celtics played without their star forward, they won the game comfortably. However, we can still expect the Raptors to put up a good fight today.