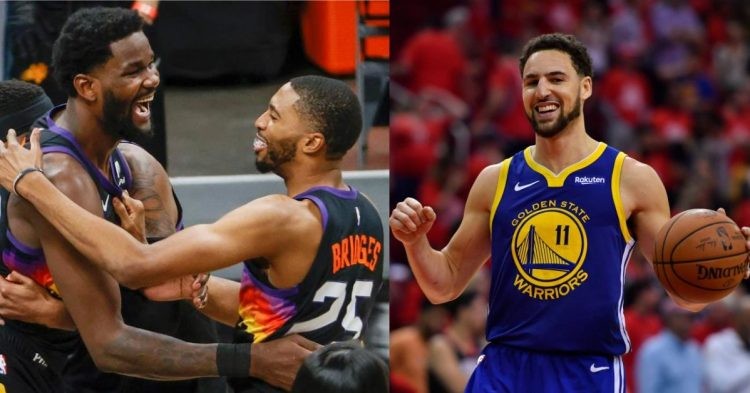 Klay Thompson’s Golden State Warriors will be taking on the Phoenix Suns tonight. Despite both these teams having a significant amount of star talent and experience, they have gotten off to a slow start this season. The Warriors currently hold a record of 20 wins and 20 losses. On the other hand, the Suns are slightly behind them at 21 losses and 20 wins.

As both these Western Conference teams are set to face off, fans might be interested in knowing the availability status and expected rosters for players on both sides. Additionally, understanding the context and background of this game will help us form an expert prediction concerning its results.

We all remember that Thompson is coming off multiple serious injuries over the past few years. Considering that he is still an elite shooter who can offer a lot to the Warriors, it would make sense to rest him and treat his injuries with caution.


According to the reports, Klay is listed as probable for this game due to knee injury management. Moreover, his co-star Stephen Curry is expected to completely miss this game while rehabilitating his shoulder injury. Therefore, it will fall upon Steve Kerr to make do with what he has and keep his team in contention.

With that being said, here are the complete injury reports and expected rosters for the Golden State Warriors vs Phoenix Suns match tonight.

As we can tell, both Chris Paul and Devin Booker are not expected to play for the Suns tonight. On the other hand, Stephen Curry and potentially Klay Thompson might also miss this game. Now, let us take a look at the expert predicitions for this game.

The Warriors will be slightly favored over the Suns tonight

Both these teams are currently struggling. GSW is currently on a two-game losing streak. While the Suns are on a 6 game-losing streak. With the two main stars on either side compromised, this promises to be an even match. However, we are siding with the Warriors in this matchup.


Jordan Poole and Andrew Wiggins were incredibly useful for their team in the postseason last year. Alongside Draymond Green, they will be expected to put on a show and get this win for their team. Considering that the best and most experienced players on the Suns will miss this game, it should be quite possible for them to win.