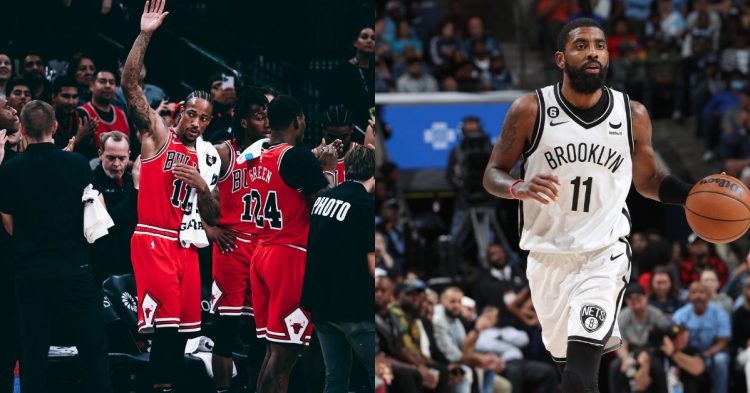 Kyrie Irving and the Brooklyn Nets are all set to take on the Chicago Bulls. The Nets are deeply riddled with Drama all year round. It’s almost like the team spends less time playing basketball and more time hanging out with the media.

The Nets have started off the season with a record of 2 Wins and 5 Losses. This record comes despite both Kevin Durant and Kyrie Irving averaging 30+ points per game. The Bulls on the other hand have had similar results getting just one more win from the nets throughout their first seven games.

With scoring machines like DeMar DeRozan and Zach Lavine, the Bulls are definitely going to be a challenge for the Brooklyn Nets.

The Nets will be missing 3 key offensive pieces tonight

According to the Nets’ injury report, Ben Simmons, TJ Warren, and Seth Curry will all be sitting out against the Chicago Bulls.

With the loss of Seth Curry and TJ Warren the Nets will be missing out on some crucial points off the bench, and they might also struggle with their playmaking and defense due to the absence of Ben Simmons.

The Bulls on the other hand have no players on the injury report except the ever-present Lonzo Ball who is still recovering from his injury.

Will Kevin Durant and Kyrie Irving be able to round up the Bulls?

If Kyrie Irving and Durant play like their usual selves then the Nets shouldn’t have any problems in taking on the Bulls considering that their bench shows up. This is a must-win game for the Nets. It’ll be interesting to see how the team plays now that their head coach Steve Nash has left.

The last time these two teams went head to head it was the Nets who came out on top with a comfortable win behind Kevin Durant’s stellar performance. Will he be able to keep it up this time around and carry the Nets over the Bulls?