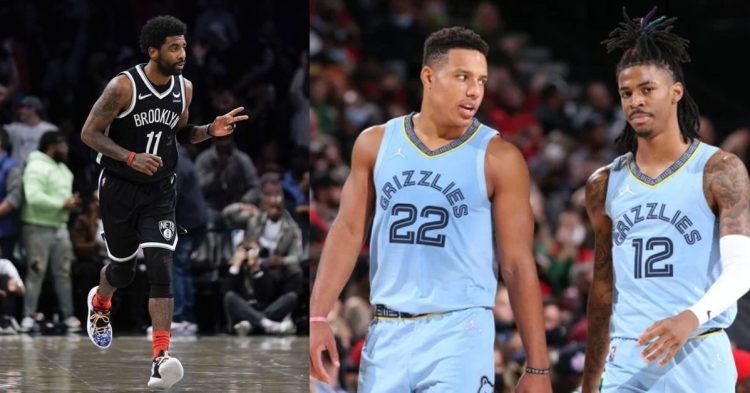 Kyrie Irving is expected to play for the Brooklyn Nets tonight against the Memphis Grizzlies. As we all know, he has been absent from the team for 8 games now. That meant Kevin Durant had to bear the offensive load for the team.

They will now be facing Ja Morant and the Memphis Grizzlies, one of the best and upcoming teams in the Western Conference. NBA fans will remember that both these teams have already faced off once for an exciting game this season. Ja and his team managed to win this first matchup despite both KD and Kyrie scoring 37 points each.

Kyrie has certainly missed a significant amount of time and might not be at full strength for this game. In any case, we should wonder if the availability status and expected rosters will be for both sides.

It might be calling it too early. Nonetheless, we have reports from NBA insider Adrian Wojnarowski indicating that Irving is expected to play against the Grizzlies. He is certainly a player the Nets need. Especially on the offensive end of the food. Additionally, their new coach Jacque Vaughn is yet to get acclimatized to and use Kyrie’s abilities well for their team.

This might prove to be a challenge against a young and competitive team like the Grizzlies. Here are the injury reports and expected rosters for both sides.

As we can tell, Ja Morant Desmond Bane will not be playing for the Grizzlies in this game. They were instrumental in the Grizzlies’ victory over the Nets the last time they faced each other.

Both the Nets and the Grizzlies will have to overcome their individual challenges if they wish to wish this game. Finally, let us take a look at the expert picks and predictions for this game.

Kyrie Irving can lead the Nets past Morant and the Grizzlies

This might be quite a bold prediction to make. However, we shouldn’t be surprised if it actually ends up happening. Kyrie was averaging 26.9 points, 5.1 rebounds, and 5.1 assists for the Nets. Additionally, he was shooting an efficient 45% from the field and 92% from the free-throw line.

The last time Brooklyn and Memphis faced off, the game finished with a final score of 134-124. Desmond Bane and Ja Morant scored 38 points each to keep the Grizzlies ahead in this game. However, both of these stars will not be playing in this game.

Therefore, we have to go with the Nets for this matchup. Moreover, they are also healthier and hungrier for a win in comparison to the Grizzlies.
Tags: Brooklyn NetsJa MorantKyrie IrvingMemphis GrizzliesNBA
Previous Post