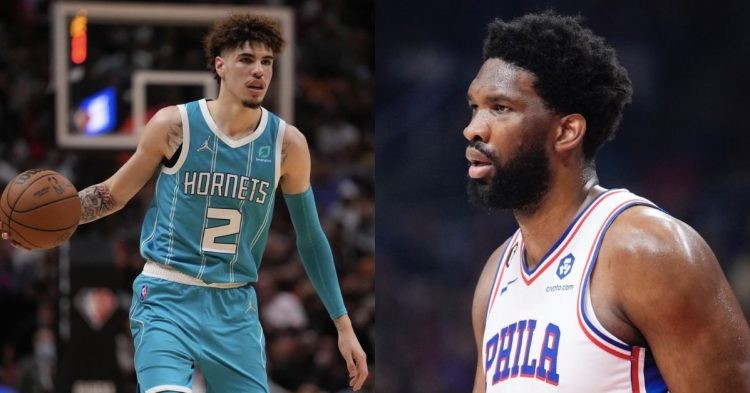 The 2022-23 NBA season keeps on getting exciting as the Charlotte Hornets face off against the Philadelphia 76ers tonight. The Hornets have won 4 out of their 18 games so far. And the Sixers, have managed quite a decent record this season. Out of 17 games, they have won 9 of them. Tonight, it will be an evenly biased game, mainly because both of these sides will be missing key players.

The Hornets played against the Washington Wizards in the last game. They came close to nicking the win, but Kyle Kuzma and Bradley Beal were crucial for the Wizards. The DC-based franchise won the game 106-102. It was a good team effort from the Hornets, but the standout players were Gordon Hayward and Kelly Oubre Jr. However, against the Sixers, the Hornets would have to show their A game.

The Hornets do not have many injuries, but one of them will break their fans’ hearts. Star player LaMelo Ball is still out after rolling his ankle when playing against the Miami Heat.

LaMelo Ball rolls his ankles after stepping on a fan’s foot.

There has been no major update from the Hornets, but according to ESPN, Ball stays out for the game against the 76ers tonight. He was listed as day-to-day a few days ago but it seems like he hasn’t fully recovered yet. Together with Melo, Cody Martin will also be missing the game.

This is where it gets interesting for NBA fans who are watching the game as neutrals. The Sixers will face the Hornets without two of their superstars. Both James Harden and Joel Embiid are out with injuries and their return dates have not been disclosed just yet. Embiid is suffering from a midfoot sprain on his left foot. As for “The Beard”, he is also facing a foot injury but is on the road to full recovery.

Unreal sequence by Joel Embiid diving on the floor after poking the ball away then ending up with the 3-pointer. Minutes after looking like he suffered a major injury. pic.twitter.com/ixGmCPk7Ia

Can the 76ers beat the Hornets without their superstars tonight?

When fans hear that the Sixers do not have Harden, Embiid, and Tyrese Maxey available, they might lean toward the Hornets to win tonight. However, Tobias Harris and De’Anthony Melton might cause them to change their minds. Against the Brooklyn Nets very recently, the 76ers stood no chance, according to many fans. They proved them wrong when Harris and Melton put up 20+ points on the board each.

They managed to outplay a Nets roster with Kevin Durant, Kyrie Irving, and Ben Simmons on it. Despite their three best players’ absence, if they can continue to play with the same grit they displayed against the Nets, the 76ers can surely beat the Hornets tonight.

For the Charlotte-based team to win, they would have to get the chemistry between Terry Rozier and Kelly Oubre Jr. going. These two players will have to make it happen since LaMelo Ball is not available for the Hornets right now. The last time these two franchises faced was in April.

The Sixers took the win by a 30-point margin. Before that, the Hornets won the game 98-109, when Hayward pulled up with 30 points on the board. The Hornets might not be able to do that this time around, given the 76ers’ in recent games.