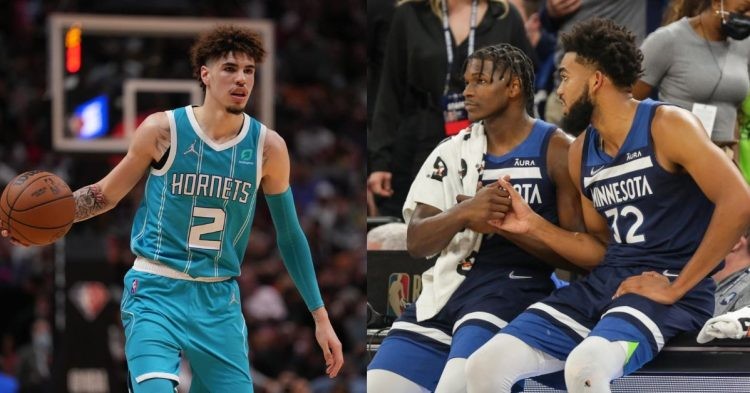 LaMelo Ball and the Charlotte Hornets will face Karl Anthony Towns, Anthony Edwards, and the Minnesota Timberwolves tonight. This should be a fairly exciting match between two relatively young teams in the league. The Hornets have gotten off to a very slow start. In fact, they have one of the worst records in the league at 5 wins and 13 losses.

The Timberwolves are a somewhat better team. Karl Anthony Towns is a gifted NBA center and Edwards has solid potential. They currently hold a record of 10 wins and 8 losses, ranking them 8th in a competitive Western Conference.

We should wonder how this matchup between both teams is going to be. Moreover, knowing the availability status for the players and expected rosters helps bring context to this game and a prediction of who might emerge victorious.

Most of us are already familiar with the talents of the young Hornets point guard. He has played in only 3 games this season and is listed out of this game due to an ankle injury. Considering the pace at which he plays and the moves he pulls off, this is not all that surprising.

It would also explain Charlotte’s bad start for the 2022-2023 NBA season. After all, not many teams with a sole star player can win if he is missing from the rotation. Nonetheless, they will have to make do with what they have for this game.

Speaking of what they have, here are the injury reports and expected rosters for both the Hornets and Timberwolves.

As both these teams are set to face off, let us take a look at the expert predictions and picks for the Charlotte Hornets vs Minnesota Timberwolves game tonight.

The Timberwolves will be favored over the Hornets

There is simply no denying that the Timberwolves are the clear-cut favorites in this match. After all, their core is completely healthy and will play against a leaderless Hornets team.

Considering that Gordon Hayward is also not expected to play, that tips the odds further toward Towns, Edwards, and the rest of the squad. Moreover, they are on a 5 game-winning streak and will look to keep their momentum in this match.
Tags: Charlotte HornetsLaMelo BallMinnesota TimberwolvesNBA
Previous Post