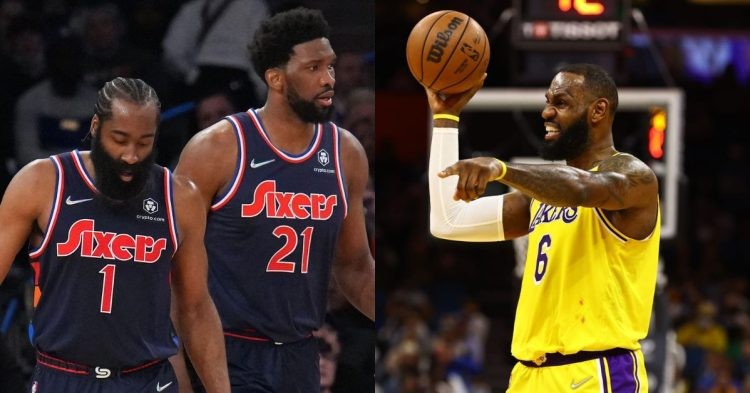 The Lakers and the 76ers share the same record of 6-4 in their last 10 games. James Harden and the 76ers were dismal against the Oklahoma City Thunder and won against the Utah Jazz with a razor-thin margin. The Lakers are without their big man Anthony Davis and keeping their title hopes up but without any real conviction. They are on a 2-game losing streak and in desperate need to collect wins, to make it to the playoffs.

King James will be looking to bring on his A-game against the 76ers who have all their stars fit. LeBron has been listed as day-to-day and is probable to play tonight’s game. Significant injuries to Lonnie Walkers IV and Austin Reaves have taken away some of the energy from the Lakers. Patrick Beverley will be questionable, who is suffering from a non-COVID illness.

Injury update ahead of Sunday’s game against Philly: pic.twitter.com/LH0LAcxWfH

The 76ers are in good shape but have stumbled a bit this season playing teams lower to them in the table. Tobias Harris is a doubt for the game against the Lakers, however, the 76ers pack enough firepower. Let’s take a look at the complete injury report and the expected roster of both teams before the two teams lock horns.

The Philadelphia 76ers will be favored to win tonight

The 76ers started their 5-game road trip with a marginal win over the Jazz on Saturday night. Coming into a back-to-back game, the 76ers will be dealing with weariness. The Lakers on the other hand will be coming into the game with a day’s break and will be fresh for the game at home. Harden and Embiid put up 30- point performances against the Jazz and could do the same tonight.

The Lakers are not at their very best but are on a steady course with Darvin Ham. Despite the progress made under the new coach, they have a long way to go. Therefore our pick will be the much-experienced 76ers. The 76ers will be looking to make it 6 straight wins against the 17x champions. Let us know who you think will win tonight’s Lakers-76ers game.