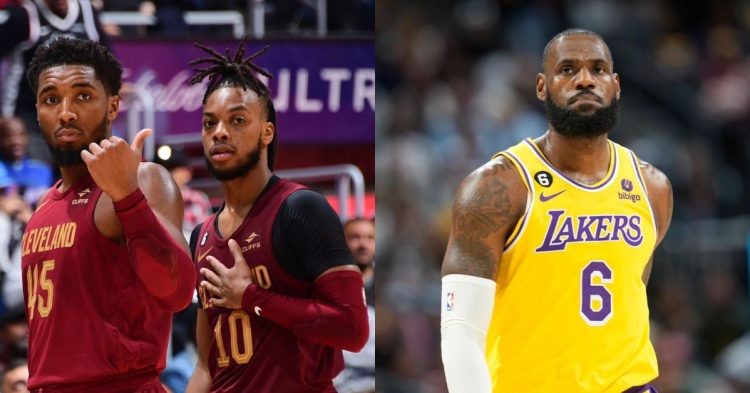 The Los Angeles Lakers will travel to the Rocket Mortgage FieldHouse to face the Cleveland Cavaliers tonight. Lakers fans will surely be excited for this one as they have done well in recent games to overcome strong teams. Can they topple the Cavs tonight?

The Cavaliers have been one of the best teams in the Eastern Conference this season. Out of 21 games, they have performed decently to win 15 of them. They sit below only the Milwaukee Bucks and the Boston Celtics in the standings. Tonight’s game will be a battle between two strong sides, but the main difference will be the players’ ages.

The Lakers do have an older roster. They boast plenty of experience on their team with the likes of LeBron James, Anthony Davis, and Russell Westbrook. The Cavaliers, however, have a much younger squad. But make no mistake, the Cavs players are undoubtedly one of the most talented bunch in the entire league. They would play a crucial role in where the Cavs finish this season.

Both the Lakers and Cavaliers are dealing with significant injuries to some of their players. For the 17-time NBA champions, it would be the one and only LeBron James. He has had some trouble with injuries in recent times. And it seems like that might be the case for tonight as well. Reports say that he might miss a reunion with the Cavs franchise tonight.

What injury does LeBron James have?

Various reports mention that LeBron is currently dealing with ankle soreness. He has had the same problem in recent times. He has injured his left ankle quite a few times now in the last few weeks. This has caused some problems with his game time as well.

For those who don’t know, King James stepped on Indiana Pacers star Tyrese Haliburton’s foot and managed to injure his left ankle. Before he could recover completely, the Lakers superstar played against the Bucks. He did not have a completely healed ankle but it looks like that isn’t a surprise considering the mentality The King has when playing in the NBA.

Unfortunately for him, Bucks’ Khris Middleton kneed James’ left ankle unintentionally during the game when the latter caught Russ’ pass. This was the same ankle that LeBron injured a few days prior.

LeBron said he tweaked his ankle again in the tie-up with Kuz in the fourth quarter, but says “I’ll be ready Tuesday.”

Obviously, Tuesday the Lakers play in Cleveland, which is a game LeBron never wants to miss.

That injury did not stop James from playing against the Washington Wizards in the next game as well. Unfortunately for LeBron fans, he tweaked his ankle yet again when he was up against former Lakers teammate Kyle Kuzma. Reports mention that he is probable for the game against the Cavs tonight, along with Anthony Davis.

Can the Los Angeles Lakers possibly continue their winning streak without LeBron James?

The Lakers have performed well on the court to win their last 3 games. And the best thing for Lakers fans is that the team looked solid from both an offensive and defensive aspect. Despite their injury woes, LeBron and Anthony Davis have been the best performers for the team in the last three outings. There is a high chance that both of them will start for the Lakers tonight since they are probable on the injury report.

The Cavaliers boast the likes of Donovan Mitchell and Darius Garland on their roster. If we’re being honest, the “Spida” broke the internet when he was traded to the Cavs a few months ago, and he has proven to be worth the hype so far as well. In 22 games, Mitchell has averaged 28.4 points, 4.9 assists, and 3.9 rebounds for the Cavs. Together with him, Darius has averaged 22.2 points, 7.7 assists, and 2.2 rebounds in 18 games this season.

J. B. Bickerstaff will be aiming to get the best out of these two players to get the win tonight. However, it might be safe for us to predict that LeBron and AD might be too much for the Cavs right now. The truth is that both of them have performed exceptionally in recent games, and it is highly likely for both of the Lakers veterans to keep that up tonight as well.
Tags: Cleveland CavaliersLeBron JamesLos Angeles Lakers
Previous Post