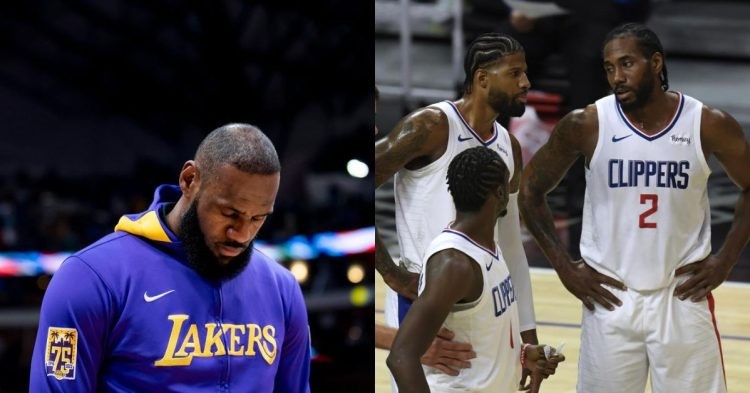 The LA Clippers look forward to ending their 4-game road trip on a positive note as they take on the Los Angeles Lakers at the Crypto.com arena tonight. This will be the third of four annual matchups between these two teams, also popularly called the ‘Battle of LA’. Both these teams will enter this contest with a two-game winning streak.

The Clippers are playing decent so far this season, though not up to expectations. They currently hold the 6th spot in the Western Conference with a 25-24 record. Their last game was a 112-98 win against the Dallas Mavericks. The star duo of Kawhi Leonard and Paul George stepped up to the plate, scoring 30 and 21 points respectively as they survived Luka and his Mavs.

On the other hand, the Lakers have struggled so far this season. They currently sit at the 12th spot in the competitive Western Conference with a 22-25 record. They took home the win in their last game against the Portland Trail Blazers, with a final score of 121-112, in which Lakers guard Patrick Beverley famously mocked Damian Lillard’s signature ‘Dame Time’ celebration.

LeBron James has been playing at a very high level yet again this season. Having recently turned 38 and in his 20th NBA season, King James has played in 37 games this season so far and is averaging an impressive 29.8/8.5/6.9. The Lakers’ record would have looked much worse if it wasn’t for his elite play. However, he is listed as questionable for tonight’s game with left ankle soreness.

Apart from him, the Lakers will be missing the services of guards Lonnie Walker IV (knee) and Austin Reaves (hamstring) and forwards Anthony Davis (foot) and Rui Hachimura, who recently got traded to the team by the Washington Wizards. All of them are listed as out for tonight’s game.

The Clippers announce that Kawhi Leonard and Paul George are both playing tomorrow vs. the Lakers.

For the Clippers, All-Star guard John Wall is out with an abdominal strain. Along with him, sharpshooter Luke Kennard is also out for tonight with a calf injury.

Here are the injury reports and expected roster for the Lakers-Clippers game tonight:

The last time these two teams faced off against each other was on November 10 last year in which the Clippers secured the 114-101 win. Paul George scored a team-high 29 points in that game, leading his team to the win. For the Lakers, LeBron James scored 30 before leaving the court early with pain in his left leg. That win put the Clippers up 2-0 in the 4-game-long ‘Battle of LA’.

Tonight, that result is likely to repeat. With the Leonard-George duo playing in tonight’s game and the Clippers riding high on their winning momentum, expect a win for them but a close and exciting game nonetheless, as it is never wise to count out King James.