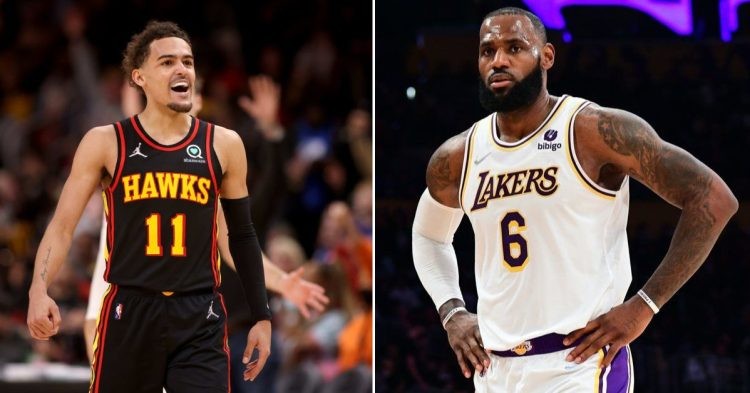 The Los Angeles Lakers will be facing the Atlanta Hawks on their home soil tonight. The Lakers are coming into this game after a win against the Miami Heat in the last game. They are looking to keep the momentum going, especially after the lackluster performances in the first few weeks of the season.

The Hawks are also coming off a win against the Sacramento Kings in the last game. Trae Young and Co. are aiming to improve their record of 18-20 so far in the 2022-23 NBA season. They might be able to take the win tonight, depending on the absentees from the Lakers roster.

The NBA world has witnessed LeBron James‘ brilliance in the last few games. He has been putting in a shift in Anthony Davis’ absence and it is quite visible. However, the Lakers might be playing a dangerous game by putting in King James when he is not 100% fit. A while ago, the 4x NBA champ had to miss numerous games due to a right adductor injury. Together with that, he has had some issues with his left ankle as well.

According to reports, LeBron is probable for the game tonight. Sources claim that he is experiencing soreness in his left ankle. Together with him, Russell Westbrook is also probable for the game, he looks to be dealing with soreness as well. The Lakers will not have AD and Austin Reaves tonight, along with Lonnie Walker IV and Troy Brown Jr.

The only player who is on the Hawks’ injury report will be Clint Capela. He is dealing with a calf injury and the rest of the Hawks’ roster seems to be available to feature against the 17-time NBA champions.

Can the Lakers continue their winning form against the Hawks tonight?

The Lakers are on a winning streak of three games going into this game. They beat the Miami Heat in the last game without the King, thanks to notable contributions from Dennis Schroder and Thomas Bryant. The Hawks, however, are no Heat. They have one of the best players in the league; Trae. He has been averaging 27.3 points, 9.9 assists, and 2.9 rebounds this season.

The last time these two sides faced off a week ago, the Lakers took a 130-121 win. Everything LeBron touched that night, turned into gold. He put up 47 points on the board, together with 10 rebounds and 9 assists to top it off on his birthday. Thomas Bryant contributed with 19 points as well. The Lakers’ win streak started with the Hawks on December 30, and they will be aiming to take the win once again.

Trae Young has been the best player for them this season, and in recent years as well. Nate McMillan has struggled to implement his ideas and it has been quite visible on the court. Dejounte Murray has been unable to help the team as much as the NBA world expected him to. Regardless, he has shown glimpses of what the Hawks signed him for, and that’s what they will be looking for tonight.

The Lakers will be the favorites tonight, especially taking into account their recent form. Since LeBron is expected to feature, that influences the results as well. We can predict the Hawks to put up a good fight, however. But LeBron and Dennis Schroder have been decent for the team in recent times, and we can expect the same tonight as well.