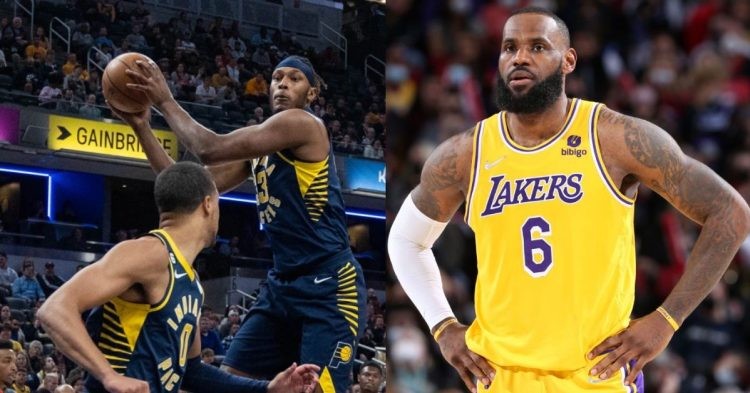 LeBron James‘ Los Angeles Lakers will be facing the Indiana Pacers tonight. One could say that the Lakers are doing somewhat better after a slow start to the NBA season. They currently hold a record of 7 wins and 11 losses. That places them at 13th in a competitive Western Conference.

They will be facing the Indiana Pacers in the hopes of further improving their record. After all, Los Angeles is on a 2 game win streak and defeated the San Antonio Spurs in back-to-back games. Be that as it may, the Pacers are currently a much better team in comparison to the Spurs. They hold a record of 11 wins and 8 losses, giving them the 4th seed in the East.

We should wonder how this matchup between both sides will go down. Additionally, knowing the availability status of the players and expected rosters will certainly help.

Most of us are already familiar that the King has already missed playing in a few games for the Lakers. He suffered some type of groin strain during a game against the Clippers and was sidelined for the upcoming games. Thankfully for Lakers fans, the team did relatively well in the absence of their veteran leader.

Led by Anthony Davis, they even defeated Kevin Durant and the Brooklyn Nets. However, as we all know, AD did not play in the game against the Spurs when LeBron made his return to the court.

With that being said, we should take a look at the injury status for expected rosters for the Lakers-Pacers game tonight.

As we can tell, both LeBron James and Anthony Davis are listed on the Lakers’ injury report. However, we believe that there is a greater likelihood of LeBron playing tonight, if not both of them. That would make sense considering that he has already missed a significant amount of time due to injuries. The team will also be missing Patrick Beverley who was suspended for an altercation with Deandre Ayon

Finally, let us take a look at the expert picks and predictions for this game between the Los Angeles Lakers and Indiana Pacers.

The Lakers will be considered favorites against the Pacers tonight

There is no denying that the Pacers are currently in a better situation than their opponents. Tyrese Haliburton and Buddy Heild have adapted to a new team and are thriving. In fact, Tyrese is currently leading the NBA in total assists made this season.

However, none of this changes the fact that they have less star talent compared to the Lakers. Russell Westbrook, LeBron James, and potentially Anthony Davis will be considered the better team and favored to win. Moreover, they are on a 2 game-win streak, while Indiana is coming off a loss to the Clippers. This should be an exciting match for us to observe.
Tags: Indiana PacersLeBron JamesLos Angeles LakersNBA
Previous Post