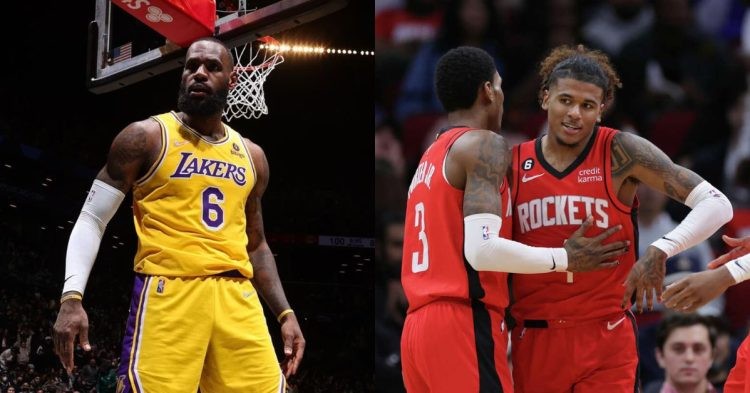 The home stand of the Los Angeles Lakers continues as they get ready to host the Houston Rockets tonight at the Crypto.com arena.  This will be the inaugural matchup between the two teams, with two more to be played as the season progresses. The Lakers, currently on a 3-game losing streak, will enter this game with a 19-24 record. The Rockets, meanwhile, are on an abysmal 10-game losing streak and would like to get out of that slump.

The Lakers have been on a downturn as of late, having lost 3 in a row and losing their last one 112-113 in a thriller against the Philadelphia 76ers last night. This will be the second game of a back-to-back for them.

On the other hand, the young Houston Rockets lost against the Los Angeles Clippers 100-121 last night. They continue their rebuild process this season, in hopes of landing a top pick in the 2023 NBA Draft and possibly getting a chance at the highly-regarded prospect from France, Victor Wembanyama.

LeBron James has been in scintillating form this season. Having recently turned 38, The King continues to defy father time, averaging 29/8/7 this season and carrying the Lakers on his back as they miss the services of fellow All-Star Anthony Davis, who remains out for tonight’s game with a right foot injury.

Along with Davis, they will be missing guards Lonnie Walker IV, who is out with left knee tendinitis, and Austin Reaves, who is listed as out with a hamstring injury. Also, veteran guard Patrick Beverley is listed as probable for tonight’s game against the Rockets, who also happen to be his former team.

For the Rockets, guard Kevin Porter Jr., who was dealing with a foot ailment, is listed as probable for tonight’s game. Luckily for them, they will have lottery pick Jalen Green and forward Jae’Sean Tate back on the court after they were suspended for the game against the Clippers.

Here are the injury reports and expected roster for the Lakers-Rockets game tonight:

The Houston Rockets managed to edge out a 130-139 OT win the last time these teams faced off, but that result is unlikely to repeat tonight. Jalen Green was the leading scorer for the Rockets in that win, going off for 32 points. But the Lakers, with a better record and better veteran players, have enough firepower even with Davis out, to beat a young squad like the Rockets this time.

Additionally, this game will feature Russell Westbrook and Patrick Beverley, who might both go off against their former team. So, expect the Lakers to secure an easy win.