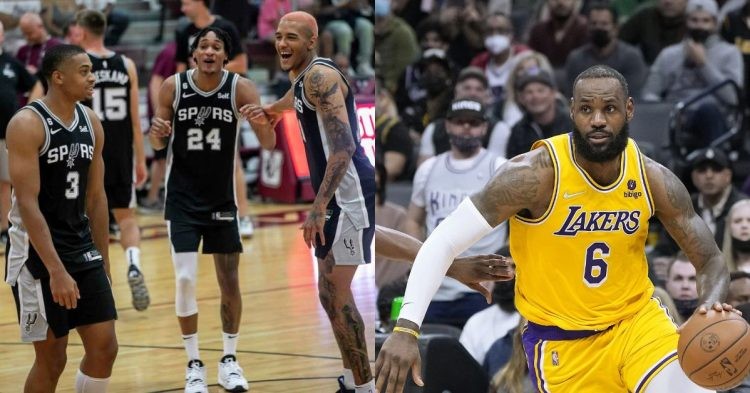 LeBron James‘ Los Angeles Lakers will be facing the rebuilding San Antonio Spurs tonight. These are two teams at the bottom of the Western Conference. The Lakers hold a record of 5 wins and 11 losses. On the other hand, the young Spurs are currently at 6 wins and 13 losses.

People might wonder how this match is going to go down. LeBron James has not played in the past few games for his team due to a groin strain that occurred in a game against the Clippers. In this time span since then, Anthony Davis has greatly elevated his performance in order to keep his team afloat.

We should know the injury reports and expected rosters for both sides. A prediction of the game and the context behind it is also always useful.

This will be the 6th game the Lakers might be playing without LeBron James. Considering that he is in Year 20, we should finally wonder if he is entering an injury-prone stage of his career.

In any case, he is listed as questionable for the game against the Spurs. NBA fans will certainly be wondering if Anthony Davis can keep up his dominant performances and get the Lakers a win tonight.

The Lakers will also be missing Patrick Beverley as he got suspended for his altercation with Deandre Ayton. It will fall upon Darwin Hamm to make the best of what he has remaining. Here are the injury reports and expected rosters for the Lakers vs Spurs game.

The San Antonio Spurs are currently in a state of rebuilding. Therefore, all of their starting players with the exception of Poetil are young and relatively inexperienced. With that being said, let us take a look at the predictions for this game.

The Lakers will still be overwhelming favorites against the Spurs

There is no denying that the Spurs have more wins than the Lakers and are seeded higher. However, it is also undisputed that Los Angeles has star talent and championship aspirations. Despite not having LeBron and Patrick Beverley, they will still be the favorites in tonight’s match.

It would actually be quite embarrassing if the Lakers lost. After all, the Spurs are currently on a 6 game losing streak. This is currently the worst losing stretch in the entire league for any team. Therefore, if the Lakers, who have a pathetic record, give the Spurs a win, we should seriously doubt their chances to become contenders.
Tags: LeBron JamesLos Angeles LakersNBASan Antonio Spurs
Previous Post