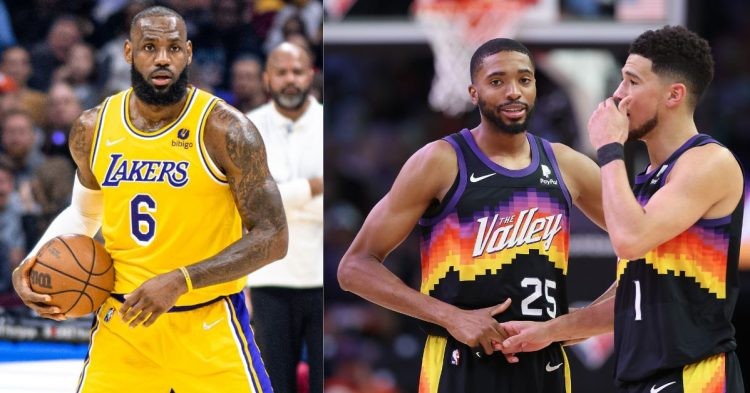 The Los Angeles Lakers will be facing the Phoenix Suns tonight. Despite LeBron James‘ injury and absence, the Lakers are finally on a 3-game win streak and currently hold a record of 5 wins and 10 losses. This is all largely thanks to repeated dominating performances from Anthony Davis.

He will have to do the same against the Suns if indeed LeBron James does not play. The Lakers defeated the Nets, Pistons, and Spurs to get on this winning streak. However, the Suns are clearly different from these other teams and will thoroughly challenge the Los Angeles Lakers.

Thus, it will fall upon Darwin Hamm to help coach his team into getting a win against a top Western Conference contender. We should wonder about the availability status for the players and the expected rosters for this game.

The King is still playing high-level basketball entering Year 20. He is averaging 24.9 points, 8.8 rebounds, and 6.9 assists. Unfortunately, he seemed to have injured himself in a game against the Los Angeles Clippers and hasn’t played since.

The Lakers managed to win all their games in his absence. Therefore, it creates a notion that they “don’t need LeBron” or that they are better off without him. We should seriously wonder how much truth there is to those statements.

In any case, a game against the Phoenix Suns will certainly force the Lakers to play their best. Devin Booker led the Suns to hold a record of 10 wins and 6 losses, one of the best in their conference. As both teams are set to face off, here are the injury reports and expected rosters.

While Anthony Davis is listed on the injury report, he is still expected to play against the Suns tonight. They might be weakened without Chris Paul and Jae Crowder. However, Phoenix is still a strong team without them. Let us take a look at the expert predictions and picks for the Lakers vs Suns game tonight.

Devin Booker and the Suns will be favored against the Lakers

Both teams are missing their veteran leaders as CP3 and King James are both expected to miss this game. Anthony Davis has certainly stepped up and delivered high-scoring performances for the Lakers. He is bound to cool down soon and a team like the Suns can certainly see to that.

After all, Booker and the squad eliminated the Lakers when they were defending champions back in the 2021 playoffs. This recent history between these two teams makes this a game worth watching. Despite AD’s dominance, we are going with Booker and the Suns in this matchup due to their elite shooting and current situation.
Tags: LeBron JamesLos Angeles LakersNBAPhoenix Suns
Previous Post