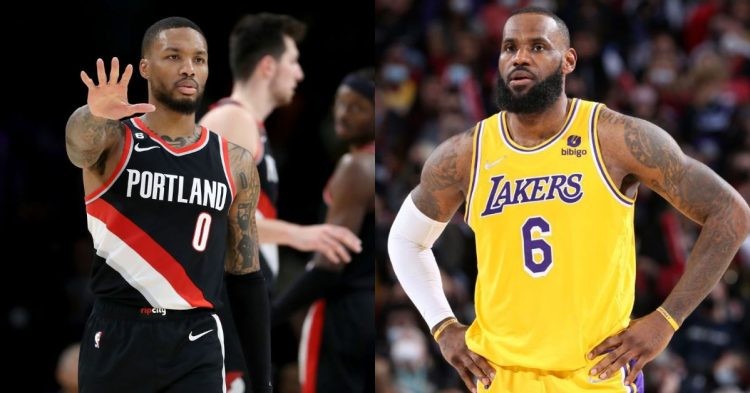 LeBron James‘ Los Angeles Lakers will be taking on Damian Lillard and the Portland Trail Blazers tonight. Both these teams are struggling to gather wins and remain in contention for this NBA postseason. The Lakers currently hold a record of 21 wins and 25 losses.

Not faring much better are the Trail Blazers who are at 21 wins and 24 losses. Considering that both these teams look evenly positioned at the moment, a win will determine who moves up higher on the conference table. NBA fans can find out more about the injury status of the stars and expert predicitions for this game.

King James is certainly playing at a level that is exceptional for someone who is 38 years old. However, injuries and the physical toll on the body rack up towards the back end of one’s career. LeBron did look somewhat fine, scoring 23 points to help the Los Angeles Lakers defeat Ja Morant and the Memphis Grizzlies.


However, he is listed as questionable due to left ankle soreness. Since the Lakers don’t have Anthony Davis at the moment, it is would be foolish to push and test the limits of LeBron James’ body. It will fall upon the rest of the Lakers squad to step up and get the job done against Damian Lillard and the Trail Blazers. Let us look at the injury reports and expected rosters for this game.

Despite LeBron being on the injury report, we still expect him to play in this game against Lillard and the Blazers. However, Anthony Davis, Austin Reaves, and Lonnie Walker IV are not expected to play. That might certainly influence the outcome of this game.

While there is no denying that the Lakers don’t look as healthy as the Blazers, they are still coming off a win against one of the best teams in the Western Conference, the Memphis Grizzlies. Russell Westbrook and Dennis Schroder stepped up and helped LeBron James get this win.


On the other hand, the Blazers are struggling and are on a two-game losing streak. Since the Lakers are also hungrier for a win and look to be feeling some momentum, we are siding with this for this game. Nonetheless, it is still expected to be very close and could go either way.