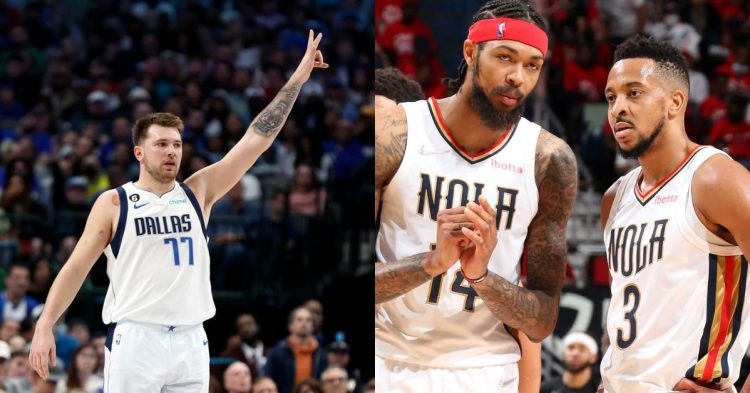 Luka Doncic and the Dallas Mavericks will host the Charlotte Hornets on Saturday night at the American Airlines Center. This will be the second of four matchups between these two teams this year. The Mavs will enter this one having lost their last game against the Celtics, the same as the Pelicans, who lost their last one against the Nets.

The Mavericks got completely outplayed by the Celtics in their last one, with Jayson Tatum putting up a 29-point triple-double to help his team secure the win. Luka had an off night, putting up 23 points on 7/23 shooting, and was looking uncomfortable on the court, coughing and grabbing at his chest several times.

Jayson Tatum dropped a triple-double to lead the @celtics to the win in Dallas!

On the other hand, the Pelicans lost a down-to-the-wire game against the Nets, who managed to secure the win behind clutch performances by Kyrie Irving and Kevin Durant.

Superstar point guard Luka Doncic has been on an absolute tear as of late, having recently put up a 60-point triple-double. He is carrying his team on his back, currently sitting in 4th position in the competitive Western Conference.

For tonight’s game, Luka is listed as probable due to left ankle soreness. Apart from him, shooting guard Josh Green and forwards Dorian Finney-Smith and Maxi Kleber will remain out for tonight’s game.

For the Pelicans, they will be missing key players Zion Williamson and Brandon Ingram with the former being out with a hamstring injury and the latter being out with a toe injury. Forward E.J. Liddell will also remain out for the game with a knee injury.

Here are the injury reports and expected roster for the Mavs-Pelicans game tonight:

With the Pels missing key players in Williamson and Ingram, and with Luka’s ongoing form, it’s expected that the Mavs will be able to pull this one off. The last time these two teams met was earlier this season when the Pels came out victorious with a final score of 113-111. Luka was the leading scorer with 37 points, but a perfectly balanced attack by the Pelicans helped them secure the close win.

The Pelicans have shown considerable improvement this season with Zion coming back, currently holding the 3rd seed, a spot above the Mavs. But with Zion out for this game, expect an outcome in favor of the Mavs. But with two tough teams battling it out, it sure promises to be an exciting game to watch.