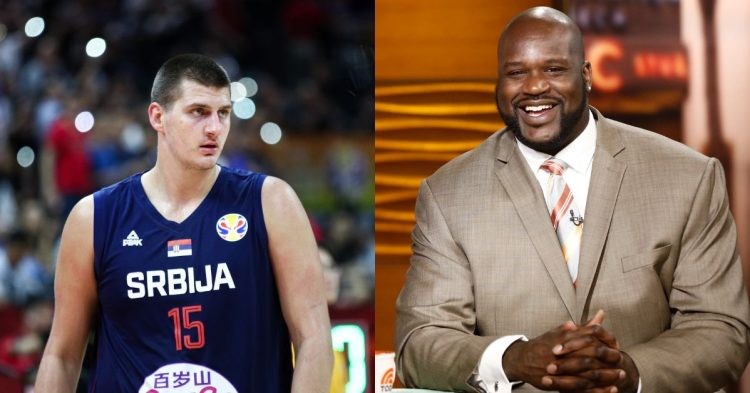 Denver Nuggets star Nikola Jokic is currently one of the most dominant players in the NBA. The Nuggets drafted him as the 41st pick in round 2 of the 2014 NBA Draft. Since then, he has gone on to make a name for himself as one of the best “big man” players in the league. Jokic has made the NBA All-Star team 4 times and has won the prestigious MVP award in 2020-21 and 2021-22.

He has caught the attention of many fans and former players around the world, and one of them was Shaquille O’Neal. In 2021, Shaq publicly spoke to Nikola on “NBA On TNT” and managed to get his nationality wrong.

On tonight’s Inside The NBA, Shaq got called a “casual” for not admitting he didn’t know Christian Wood’s game, broke his mic racing to the board, and thought Nikola Jokic was Russian.

How does he still have this gig

Although the others laughed Shaquille’s ignorance off, it seems like the former LA Lakers star got on the wrong side of Twitter fans. Many called him out for having a huge seat in the NBA media industry and still not knowing what nationality a player of Jokic’s caliber was.

If it wasn’t established already, Jokic is Serbian. He was born in Sombor, Serbia in 1995. However, despite the amount of information available, fans still thought Jokic was Russian and not Serbian. A fan wrote, “Thank god for basketball or Nikola Jokic would have no choice but to be a Russian goon.”

Thank god for basketball or Nikola Jokic would have no choice but to be a Russian goon pic.twitter.com/tOtiV06Lp6

Another Twitter user mentioned, “We are watching the Nuggets-Wolves game, and my wife said she thinks Nikola Jokic looks like if Rob Gronkowski grew up on a Russian farm. And…she’s right.”

We are watching the Nuggets-Wolves game, and my wife said she thinks Nikola Jokic looks like if Rob Gronkowski grew up on a Russian farm.

One might think the reason for the extremely common misconception of the 27-year-old’s nationality would be the distance between Serbia and Russia. However, the actual fact is that the two countries are more than 3,400 miles apart. However, Jokic’s talent may have been the actual reason why many think he is Russian. In the past, he has revealed to the media that he can speak some of the words in the Russian language.

However, it is no secret that Jokic has played many times for Serbia in the past. He is one of the key players for the country and has represented them at many competitions over the years.

This year, the Nuggets star played in the FIBA EuroBasket 2022. He averaged 21.7 points, 10 rebounds, and 4.3 assists as Serbia fell to Spain in the first round.