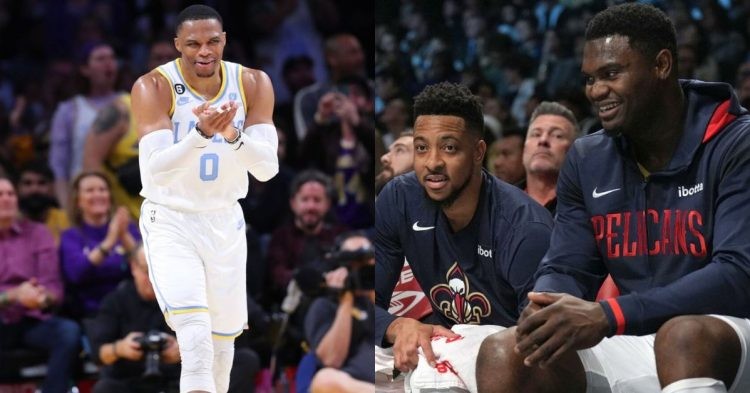 Russell Westbrook of the Los Angeles Lakers, and Zion Williamson and CJ McCollum of the New Orleans Pelicans (Credit- Twitter)

Russell Westbrook and the Los Angeles Lakers are all set to take on the New Orleans Pelicans for their next match. The Lakers have struggled heavily to start their reason winning just 1 out of their first 6 games. Their first win came after Russell Westbrook was moved to the bench, Westbrook seemed to thrive in his role off the bench.

18 points, eight rebounds, and eight assists off the bench

On the other hand, the Pelicans have had an amazing start to their season with a record of 4 wins and 2 losses. No one expected much out of this young team but they have been proving everyone wrong so far, with the kind of streak that they are having the Lakers might be in for a long night.

The Lakers might not have LeBron James and Anthony Davis on the floor for their game against the Pelicans since both of them are on a day-to-day basis. Apart from that Dennis Schroder, Juan-Toscano Anderson, Cole Swider, and Thomas Bryant are also on the injury report.

The season has just started and the Lakers are already riddled with injuries, if the situation doesn’t improve they will surely be in for a long season.

The Pelicans will also be missing a few key pieces tonight. Brandon Ingram, Kira Lewis Jr., E.J. Liddell, and Herbert Jones are all out for their game against the Lakers, according to reports.

The Pelicans are without Brandon Ingram and possibly Herb Jones (day-to-day) and they are STILL 3-point favorites against the Lakers tonight in L.A. Says a lot about the state of both franchises right now.

Will Russell Westbrook and the Lakers be able to take on the Pelicans?