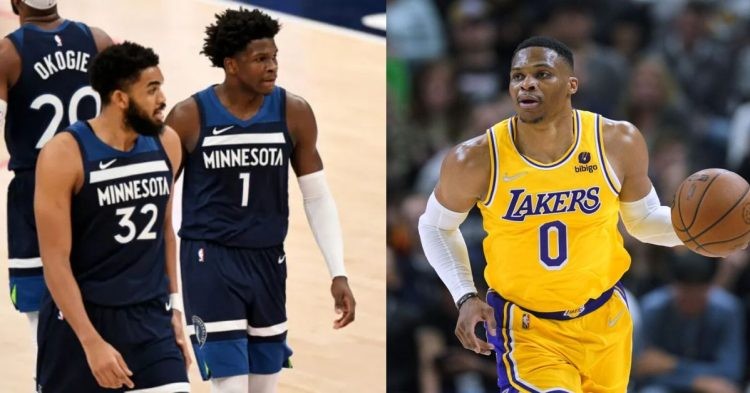 The 2022-2023 NBA season has not started well for LeBron James, Russell Westbrook, and the Los Angeles Lakers. Despite making changes to the roster and management, the Lakers currently have a record of 0-4. This is the worst record in the Western Conference presently.

Los Angeles is coming off a loss to Nikola Jokic and the Denver Nuggets. Many people assumed that Westbrook’s poor play was the reason for the Lakers’ slow start. He suffered a hamstring strain at some point and did not suit up for the Nuggets game. However, the Lakers still lost that game in a blowout 110-99 loss to the Nuggets.

Now they face Karl Anthony Towns and Anthony Edwards from the Minnesota Timberwolves desperate for a win. The Timberwolves signed Rudy Gobert this offseason and look to be a contender in the conference. We should wonder about the availability of the players on both sides and what the rosters could look like.

There is simply no nice way to say it. The Los Angeles Lakers are already showing themselves to be a bad team. They had their first opportunity to play without Westbrook three games into the season and failed to secure the win. LeBron James scored 19 points in the loss to the Nuggets. However, he had 8 turnovers as well.

We should try to put ourselves in the feet of Westbrook. None of the Lakers guards did particularly well in the game he missed. Should he sit back or feel pressure to join his team? In any case, if he does not play vs the Timberwolves and the Lakers still lose, things will look near pathetic.

Anthony Davis looks as fragile as ever. He appears to be wincing and grabbing at something almost every play. That is why he is listed on the injury report. However, we still think his chances of playing are greater than Russell Westbrook’s.

Anthony Edwards and the Wolves currently hold a record of 3-2. He is coming off a dominant performance against the San Antonio Spurs where he scored 34 points, 9 assists, and 3 rebounds. The Timberwolves will be a good test for the Lakers.