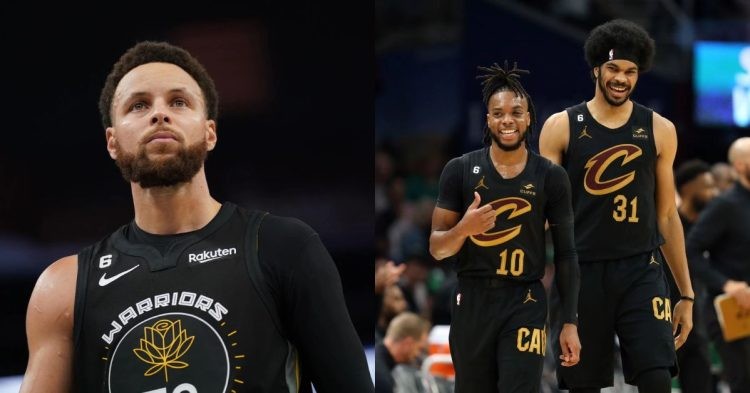 The Golden State Warriors continue their 5-game road trip as they get ready to visit the Cleveland Cavaliers tonight at the Rocket Mortgage FieldHouse arena. This will be the second of two matchups between the two teams this season. The Warriors have won 2 of their 4 games so far on this road trip and will enter this game with a 22-23 record.

The Cavaliers, meanwhile, are quietly having an impressive season. They have also won 2 of their last 4 games and are sitting at the 4th spot in the Eastern Conference with a 28-18 record. They lost a close one against the Memphis Grizzlies a couple of nights ago, with a final score of 114-115. The young squad seems to have greatly benefited from the addition of all-star guard Donovan Mitchell this past offseason.

On the other hand, the defending champs Golden State Warriors lost 121-118 against the top-seeded Boston Celtics last night. For them, things haven’t worked out as planned so far this season, as they keep lingering around the .500 mark in the ultra-competitive Western Conference, currently holding the 9th seed.

Stephen Curry has been playing at a high level again this season. The ‘Baby Faced Assassin’ has played 31 games this season so far, averaging 29/6/6 and carrying the Warriors on his back as they look to repeat their success from last season. For tonight’s game, he is listed as out. The reason for his absence will be a hip injury, as reports mentioned just a few hours ago.

But the Warriors will be missing the services of center James Wiseman (Ankle Sprain) and forwards JaMychal Green (Right Lower Leg Infection), Andre Iguodala (Right Hip Soreness), and Jonathan Kuminga (Right Foot Sprain), all of whom are listed as out for tonight’s game.

Here are the injury reports and expected roster for the Warriors-Cavaliers game tonight:

The Cavaliers are favored to win against the Warriors tonight

The Warriors have won each of their last 11 regular season games against the Cavaliers, making it their longest active winning streak against a single opponent. They managed to secure a 106-101 win the last time these teams faced off against each other. However, their star-studded injury report rules them out as favorites. Steph Curry, Klay Thompson, Andrew Wiggins, have all been ruled out for the game tonight.

Stephen Curry was the leading scorer for the Warriors in that win, going off for a clutch 40-point performance. For the Cavs, Mitchell and Mobley scored 29 and 20 points each but that just wasn’t enough to get the win. However, it is worth noting here that this will be a home game for the Cavs, who hold the best home record in the East. Hence, we can expect the Cavs to get the job done tonight.

The Warriors-Cavs matchup has been a famed one in recent years. And while it might not hold the same appeal after the departure of LeBron James from the Cavs, it still promises to be a good contest between two good teams.