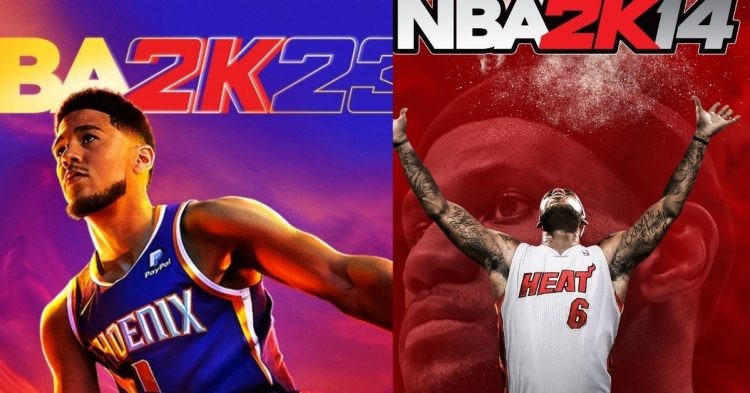 The NBA 2K Cover has been released. Devin Booker, from the Phoenix Suns, has been selected this year. This has caused speculation about the NBA 2K Cover’s “Athlete Curse“. This refers to a claim that every cover athlete for the video game over the years has ended up leaving his team.

One must wonder how true these claims must be. After all, it is definitely possible for the game makers to strike out and “get it wrong” at least a few times over the last two decades.

LeBron James, Kevin Durant, Kyrie Irving, and several other NBA stars have cover athletes. However, they have all chosen to leave their teams at some point in their careers. There have been several reasons each has decided to leave. In most cases, it has been the desire to pursue an NBA title with a championship-level team.

There are only three athletes who have been on the cover still remaining with their teams. Additionally, these players only made the covers in 2019,2021, and 2022. They are Giannis Antetokounmpo of the Milwaukee Bucks, Damian Lillard of the Portland Trail Blazers, and Luka Doncic of the Dallas Mavericks.

The superstars who soon switched teams dominate the ones who did not. Chris Paul, Michael Jordan, Kevin Garnett, Blake Griffin, Derrick Rose, and several other players did end up leaving their teams. This has caused speculation regarding the validity of the curse.

Devin Booker is the 2023 cover athlete. Additionally, his team was eliminated in the second round, after coming off an NBA finals trip. To add to it, Kevin Durant has suggested the Phoenix Suns as a preferred destination. Therefore, the idea of Booker being traded is quite possible.

It is important not to take every trade whisper seriously. Devin is a star for the Phoenix Suns. He is only 25 years old and leads the team in scoring. Therefore, trading him for a veteran 33-year-old in KD is quite unlikely. The Suns would be better off trading Chris Paul and pairing up KD and Booker together. This would improve their chances of winning an NBA title.

Luka, Giannis, and Dame have not left their teams and have all been chosen in recent years. Therefore, it is also possible for Booker to follow in their present path as well.