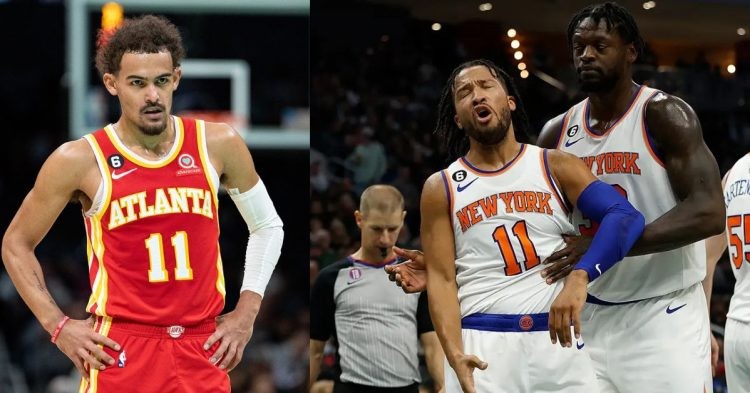 Trae Young and the Atlanta Hawks will be taking on the New York Knicks tonight. We are halfway into the NBA season and teams are fighting for a good spot in the NBA playoffs. At the moment, the Hawks hold a record of 23 wins and 22 losses, giving them the 8th seed in the Eastern Conference.

Just one spot ahead of them, at the 7th seed, are the New York Knicks with a record of 25 wins and 21 losses. Considering that both these teams have a recent history in the NBA playoffs, fans are quite eager to watch this game. That said, let us take a look at the injury reports, expected rosters, and expert predictions for this match.

Unfortunately for Hawks fans, Trae doesn’t look completely healthy for this game. According to the reports, he is listed as questionable due to left ankle soreness. This looks to be happening more frequently as the season progresses as we have seen with Charlotte Hornets star LaMelo Ball.


Therefore, it will fall upon the rest of the Atlanta Hawks squad to get the job done. They haven’t won all that many games and are behind the Knicks this season. This is despite the addition of Dejounte Murray from the San Antonio Spurs this offseason. Injuries will certainly play a role in the outcome of this game.

As we can tell, the New York Knicks look healthier for this matchup against the Atlanta Hawks. With that being said, here are the expert predicitions for this game.

The Hawks will still be favored over the Knicks tonight

Trae and the Hawks did not start the NBA season very well. That is why they dipped down to the lower half of the Eastern Conference table. However, they are playing quite well at the moment and are on a 4 game winning streak. These were matches against tough teams like the Miami Heat and the Dallas Mavericks. Since Trae is only listed as questionable, he might still play in this game. Even if he does not, the Hawks still have quite a talented roster.


On the other hand, despite trading for Jalen Brunson this NBA season, the Knicks are on a two-game losing streak. Not having Mitchell Robinson, a useful center will put all the more pressure on Julius Randle to play at a high level. It might not be possible for him to stop Clint Capella and John Collins.

In any case, this is still expected to be a close matchup and go down to the wire. After all, the Knicks have made some moves and still have the better record when all is said and done.

Mauricio Rua vs Ihor Potieria Prediction: Who Wins at UFC 283?