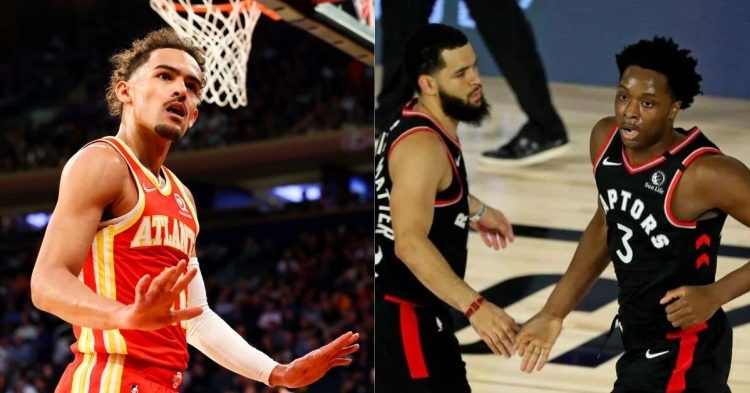 Trae Young and the Atlanta Hawks will be facing the Toronto Raptors tonight. Both these teams have gotten off to a relatively good start this NBA season. The Hawks currently hold a record of 9 wins and 6 losses, making them tied for third place in the Eastern Conference.

Toronto is doing quite well despite a comparative lack of star talent. The Raptors are currently at 9 wins and 7 losses, just one game below the Hawks. However, due to the competitive nature of the season, they are in the 6th position.

Since these are still the early stages of the season, the conference standings could easily change and look very different. We should wonder how this matchup between the Hawks and Raptors will go down. Additionally, knowing the availability status of the players and expected rosters will help.

The Hawks’ star point guard has already missed a few games this season due to injuries. This is not surprising, considering the pace and aggressiveness with which Young operates.

Thankfully, his previous injury was diagnosed as an injury to the shin. This is nothing very serious. Moreover, his team hasn’t really slowed their winning pace with him missing time. Neverthless, NBA fans should note that the Hawks are coming off a loss to the Boston Celtics. They will be looking to get over this loss and secure a win against the Toronto Raptors. Here are the injury reports and expected rosters for both sides.

As we can already tell from the reports, the raptors have several key starters who are expected to miss this game. Finally, let us take a look at the predictions for the Hawks-Raptors game.

The Toronto Raptors are actually on a two-game winning streak heading into this matchup. They defeated the Detroit Pistons and Miami Heat in their previous games. However, we simply cannot expect them to win this match with Pascal Siakkam, Gary Trent Jr, and Chris Boucher all listed out.

Siakkam is clearly one of the best players the team has. He strained his groin in their last game. He is expected to be reevaluated in a week. Even if they did Pascal, the Hawks simply have too much talent on their roster. Especially with the latest addition of Dejounte Murray. Therefore, Atlanta will be favored to win this game.
Tags: Atlanta HawksNBAToronto RaptorsTrae Young
Previous Post