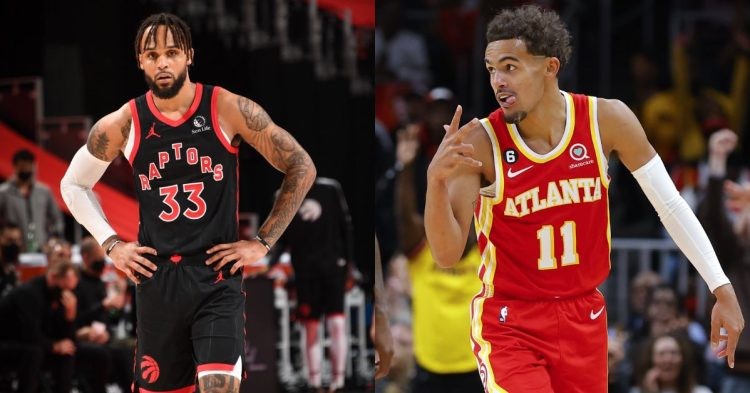 The NBA has been a rollercoaster of a season so far. There have been many teams who have both given their fans a show and disappointed them at the same time. One such team might be the Atlanta Hawks. The Trae Young-led franchise has won 4 out of the 6 games played in the 2022-23 NBA season. Their losses have come against the Milwaukee Bucks and the Charlotte Hornets. The Hawks will be facing the Toronto Raptors tonight.

As for the Toronto Raptors, they currently have a record of 3-3 so far this season. Pascal Siakam has been their best player so far this season, along with Gary Trent Jr. The last time these two franchises faced each other was in April. The Raptors took the win in that game in a 118-108 win. The Hawks will be looking to get their revenge tonight with most of their key players available for selection.

According to various reports, the Hawks will be playing the Raptors tonight without Bogdan Bogdanovic. The Serbian is currently recovering from a knee injury and his return date is still unknown.

The 30-year-old has not made a start so far in the 2022-23 NBA season. It is still unknown if the avulsion fracture on his right knee has been the reason for his absence. Many reports say that Bogdan had a procedure done in the offseason and is taking his time with the recovery.

For the opposition, the Raptors will also have only one player out due to injury. It will be Otto Porter Jr. He joined the Raptors in the summer after winning the 2022-23 NBA championship with the Golden State Warriors. Sources mention that Otto will be out for the Raptors for quite some time because of personal reasons.

Can Trae Young keep up his form for the Hawks against the Raptors tonight?

Trae has been the standout player for the Hawks as we all expected. Despite being an exceptional player already, he just seems to be getting better as time passes. He has averaged 31.5 points, 9.7 assists, and 3.8 rebounds in 6 games so far.

The Hawks are one of the most underrated teams in the NBA, but they have their troubles at times too. They might have talented players like Trae and Dejounte Murray, but it seems like their defense is the problem. The Hawks have a defensive rating of 112.4, which is the 17th on the table.

For the Raptors to win, they would have to exploit their loopholes perfectly. However, considering the form Trae is in, the Hawks have a higher chance of winning.