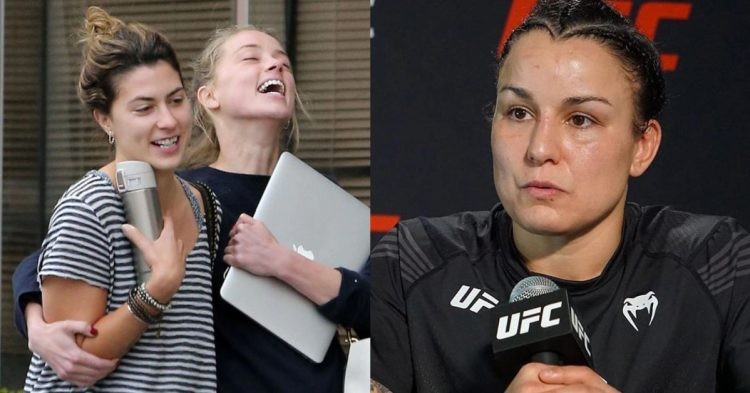 Raquel Pennington relationship with Amber Heard is not what people think it to be. (Credits: Twitter)

Raquel Pennington is an American MMA fighter competing in the UFC’s bantamweight division. Currently, she is the #5 ranked contender in her division.

Following a loss to Holly Holm at UFC 246, ‘Rocky’ has made a complete 180 on her UFC career. Going 4-0 in her last 4 fights, Pennington has been dominant and decisive. In her unbeaten purple patch, Raquel has beaten the likes of Aspen Ladd, Pannie Kianzad, and Macy Chiasson. She is also a one-time UFC title contender.

Interestingly, Raquel has been mixed up with another Raquel Pennington, who is the best friend of Hollywood actress Amber Heard. Moreover, both Raquels also look identical ( to some) and even have the same alias/ nickname of ‘Rocky’ In case you’re wondering, yes, this has led to problems in the past, especially during Amber Heard’s court trial.

The other is Raquel Pennington, who is Heard’s best friend and a Los Angeles-based yoga teacher. Incidentally, she testified against “Pirates of the Caribbean” star Johnny Depp, which led to a lot of backlash against her. Unfortunately, her namesake, the UFC fighter, was dragged into the mess.

As a result of her testimony, Pennington was subject to a lot of hate and criticism online. With people and even media outlets unable to distinguish between the two, the UFC fighter had to bear a lot of it. Speaking to MMA Fighting, Rocky revealed that she received hundreds of messages on her social media outlets, full of hateful comments.

This is starting to piss me off that ppls jobs are to report news but they can’t even get their facts straight! If your so invested in something you should know what your talking about! I don’t have shit to do with this situation! It’s another Raquel Pennington! https://t.co/QbuAGHzlWE

Further, Raquel also criticized people and the media for not doing their research and being unable to distinguish between the pair. Moreover, Rocky revealed that the hate and the abuse were even directed toward her partner, Tecia Torres as well. Despite the unfortunate circumstance, the couple maintained their composure and handled the situation well.

As such, Raquel also put out multiple tweets and gave her statement on the situation. Eventually, people were able to see their error, and people also reportedly offered their apologies to the fighter. Despite the turmoil and the situation, Pennington was able to maintain her form inside the Octagon.

Additionally, Raquel and her partner, fellow UFC fighter Tecia, recently announced that they are expecting a baby! Thus, the couple has been able to put the ordeal behind them and will be looking forward to parenthood together.