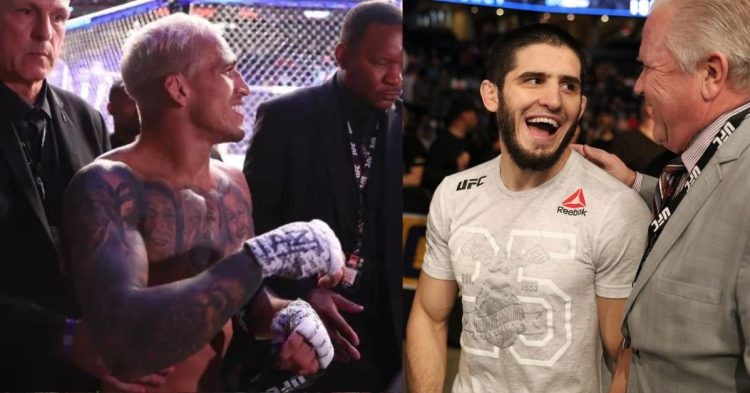 One of the anticipated title fights of the year takes place in the main event of UFC 280 in Abu Dhabi. Former lightweight champion, Charles Oliveira will face Islam Makhachev in Etihad Arena.

It’s needless to say that Charles Oliveira will be walking out in front of a hostile crowd to fight for the vacant lightweight title. And during the open workout session for UFC 280 it was clear that fans will not be cheering for the Brazilian in the main event.

Fans booed Do Bronx during his open workout to which the former champion had a bold response. Oliveira silenced the crowd and stayed focused in his goal, which is to win back the lightweight title in the Etihad Arena.

During the open workout, Oliveira stated: “I was born for this. I am gonna show him I am enlightened. I know you guys have been rooting for him but I am gonna knockout Islam Makhachev in the first round”

Charles Oliveira has been repeatedly saying that he will knockout Islam Makhachev in the first round and shocked the world. Now it’s a very likely scenario that Oliveira wins this matchup despite the odds. However, it will be difficult to count out Makhachev who is arguably the biggest test for Oliveira in the division.

How will Charles Oliveira’s eye surgery affect the fight?

Former lightweight champion, Charles Oliveira has one of the most impressive resumes among all the UFC champions right now. He has beaten the likes of Dustin Poirier, Justin Gaethje, Michael Chandler and the list goes on.

What’s crazy is Oliveira did that with an extremely bad eye sight. Oliveira has admitted that he used to see three opponents inside the octagon and yet he was able to outstrike some of the elite lightweights such as Michael Chandler and Justin Gaethje.

And now Oliveira’s eye sight is 100% perfect after recent eye surgery. The former champion confirmed that he will be getting into the octagon to fight Islam Makhachev with a flawless vision.

And it will have a significant impact on the fight if Makhachev choses to strike with Oliveira. Although Oliveira has beaten Gaethje, Chandler and Poirier he got knocked down by all of them in the first round.

One of the main concerns for fans of Oliveira was his poor defense against Dustin Poirier in the round number one. But, his defesne and head movement is likely to get much better now that he has a perfect vision.

But, it’s safe to say that most of the fight will take place on the ground. The most intriguing question is can Oliveira hurt Makhachev enough in the striking exchanges.